Get the August Bank Holiday blues – and rock, folk and hip-hop 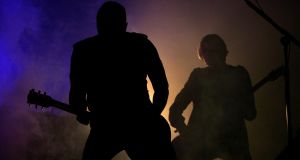 Sons of Southern Ulster
Art and Culture Centre, Bailieboro, Co Cavan, Friday August 4th, 8pm, Adm by donation (all funds raised to Cavan Hospice)
The Washerwoman, Ballina, Co Tipperary, Saturday August 5th, 8pm, €10
“Get ready for a punky spacefolk invasion,” advises (or is it warns?) the promo leaflet for a couple of rare live performances from Cavan’s Sons of Southern Ulster. Primarily duo JJ Kelly and David Meagher, SOSU’s terrific 2016 debut album, Foundry Folk Songs, promptly disappeared down a hole marked “cult”. Its songs of small-town Ireland, however, continue to resonate among those that value not only its musical influences (a blend of Whipping Boy, Velvet Underground, The Fall and A House) but also its insightful collection of rural Ireland tales. Rarely has there been such a progressive, psycho-geographical album released in recent years. No city dates? Sons of Southern Ulster wouldn’t have it any other way.

Beatyard
Dún Laoghaire, Co Dublin, Saturday August 5th & Sunday August 6th, €59-€89 plus booking fees the-beatyard.com/tickets/
Beatyard has become a staple part of the August Bank Holiday weekend, bringing in some of the best live acts to Dún Laoghaire harbour, like headliners Mark Ronson and Air. Make sure you pencil in Bananarama, Rusangano Family, Morcheeba, Soulé, Romare and Toots and the Maytals to your schedule. Various other ’yards (Eatyard, Gamesyard, Banteryard, Kidsyard) will make sure that you’re well fed and entertained, and the many Brewtonic Bars onsite will wet your whistle all weekend long.

The last time Regina Spektor – the Russian-born singer and songwriter who cut her creative teeth in New York’s anti-folk/Strokes environment of the very early 2000s – played Ireland was in 2013, when she played Dublin’s Olympia theatre to an adoring throng of mostly women. It was one of the best gigs this writer has ever been to; Spektor’s command of the fans was supreme, idiosyncratic and charming, and the response to her was so tightly connected it was virtually symbiotic. Welcome back – frankly, we’ve been waiting too long.

Sim Simma All Day Summer Party Connolly’s of Leap, Co Cork, Sunday August 6th, 4pm, €12 connollysofleap.com
For a whopping €12, you can get a taste of somewhere totally tropical with the resident Sim Simma DJs – and their special guests Bon Voyage and Toby Kaar – as they take over the hidden gem that is Connolly’s of Leap. Sim Simma’s vibe is chill sonified, ie perfect bank holiday fodder, as they’ll spin a delectable selection of Caribbean, African, Latin and hip-hop tunes. Kicking off at 4pm, their tunes will keep you going on into the night.

Eric Bibb
National Concert Hall , Dublin, Thursday August 10th, 8pm, €26 nch.ie
A real-deal blues troubadour isn’t something you don’t see or hear very often, so when New Yorker Eric Bibb comes to town you best make whatever plans you have to in order to nab a ticket and grab a seat. Tipping a hat in the direction of Taj Mahal (the 1960s blues musician who, noted Village Voice music critic Robert Christgau, “took on the mission of making acoustic blues a locus of black pride”), Bibb delivers subtle blues/soul with a perceptive balance of significant twists of the knife. A class act.

Nadia Reid
Róisín Dubh Galway Thursday August 10th, 9pm, €12.50/€10 roisindubh.net
It has been said of New Zealand singer-songwriter Nadia Reid that she is saving folk music. From what we’re not sure, but there’s little doubt that her self-released 2014 debut album, Listen to Formation, Look for the Signs, and this year’s follow-up, Preservation, are welcome and necessary additions to the genre. If you’re looking for reference points (and we know you are), they’re along the lines of Laura Marling, Martha Wainwright, Gillian Welch, Sharon Van Etten and Stevie Nicks. She’s in good company, then, and to say she holds her own is an understatement.