Bono: the voice of innocence and experience

In a fast car in Italy, the U2 singer takes a ride through the band’s Dublin roots 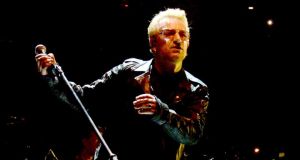 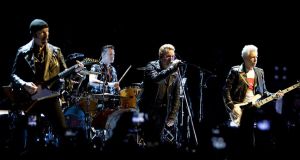 Late at night, in a fast car on the motorway between Turin and Milan, en route to meet the Italian prime minister Matteo Renzi, Bono goes quiet before saying: “The greatest line ever said about me and also the most accurate line ever said about me was most definitely by my father. He said, ‘You, Bono, are a baritone who thinks he’s a tenor.’ And that is the story of my life right there.”

He has sung about his father in the past; he is now singing about his mother. When he performs Iris live earlier tonight, he sinks to his knees, weeps and then makes the sign of the cross.

“It’s hard, of course it’s hard singing that song,” he says. “But I’ve always had this big thing which is: What is the point of being in U2 if we can’t take on subject matter that others would find uncool?” He raises his voice. “I mean, what is the point?”

We pull into a lay-by so he can play tracks from the next album, Songs of Experience. His voice comes through his phone singing about “the dying of the light”. He harmonises with himself as the album continues and gives every song an introduction: “On this one we were going after a broken cassette recorder type of sound”; “This has got a really crunchy beat”; “You have to hear Edge’s guitar work on this”; “Just wait until you hear the drum break on this one.” He’s lost in his music, staring out the window as he sings along.

The Italian prime minister is waiting but it seems that cat can chill. Bono keeps scrolling and playing. “We’re going to get this album out next year; unusually for us, a lot of the songs are done already,” he says. (I’ve heard that before.)

By now, I’ve one eye on the car’s clock and am calculating my chances of making it back into Turin tonight. I open the door and place one foot on the ground. “Listen to this. It’s really atmospheric, it was written for a film,” he says. Two feet on the ground now – I could just make a run for it. “Wait! You have to hear this one, it’s really sad . . .”

After the final encore in Turin that night, I Still Haven’t Found What I’m Looking For, Bono improvises a bit of Patti Smith’s People Have The Power, walks off stage and directly into an already revving car in which I’m waiting for him. The music is still playing as the police escort guides us out of the venue.

“I thought last night’s gig was great [the tour’s opening night] and it was really ‘there’ because the script was there and the feelings were there . . . It’s when you’re confident enough to be able to relax, it becomes even more powerful. It’s like throwing a punch. There were some hip rhythms in there – it’s the pelvis”.

The concept for the Innocence + Experience tour began on the opening night of the 360° tour in Barcelona in 2009. For a band who had been forged in the white heat of punk/New Wave music in the late 1970s, there was a realisation upon seeing the enormodome scale of 360° that the next tour would have to go indoors and pull the audience in tight.

For Bono, the distance travelled between then and now throws up some uncomfortable truths. The teenager who took the bus into Trinity to see The Clash perform in the Exam Hall and then bunked into the State Cinema in Phibsboro to worship at the stage of The Ramones: what would he make of the Bono he has become? A billionaire Southsider with global political leaders on speed dial.

His answer is in the new lyrics he has written for these European shows: “I go back to talk to that teenage Bono [who he refers to as the boy] from where I am now.”

The boy looked at Bono

Public perception is not the 55-year-old Bono’s only worry. The Rev Jack Heaslip, who had been the band’s spiritual touchstone since they were all schoolkids at Mount Temple, died earlier this year. Larry Mullen’s father died in May. In the same month, their tour manager of 30 years’ standing, Dennis Sheehan, died of a heart attack after a show in Los Angeles.

Bono sighs deeply and says: “This thing about mortality: if experience has taught me anything it is that joy is an act of defiance to the world. The fun, the frolics – the moment you’re in, be fully in it. Death and mortality? I answer with joy. U2 came into existence to fill a void, a gaping hole in my heart.”

A song on the new album has the lyric: “I only sing to prove that I am here.”

On the current tour, the blue sky of Contra-ridden Nicaragua in Bullet the Blue Sky has been recast as the blue water of the Mediterranean on which the stars of the European flag appear. In the centre of the flag floats a lifeless human body. The anthem of the European Union – Friedrich Schiller’s Ode To Joy – is played with sardonic intent.

I mention the video that comes up during the song portraying what I take to be the four band members as refugees, walking wearily through the night. “Oh no, no, no, those people are not us. They are real refugees in Calais. You really thought that? Is it ambivalent? That could be a worry.”

As we speed along we talk about cholesterol levels, The Clash’s Sandinista album, his blond hair being there to remind him daily of 1979 (the last time he wasn’t famous), and how he wants the new album out next year but “I’m the least reliable member of the band on this”. He frets about people flying into Dublin from the other side of the world to see them in the 3Arena in November and not having tickets.

Beat on the brat

At a late hour, I leave him there in the dark, in a lay-by somewhere between Turin and Milan, lost in his music. The scene is like a visual representation of Hank Williams’ Lost Highway song. Before closing the door, I hear him sing “I can take the growing old” and then plaintively asking how he can turn off the songs playing on his phone. “I can’t turn off the music. I don’t know how to turn off the music.”

“I don’t know where the stop button is.”