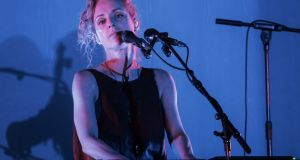 She is the architect of eerie, otherworldy music that straddles neo-classical, jazz and chamber pop. For her last album, she had a replica of a 1920s synthesiser called a Trautonium made. She has been certified platinum across Europe and has multiple awards weighing down her mantelpiece, but today Agnes Obel is really just like the rest of us.

“I’m at home in Berlin, in the middle of my living room, looking at all the laundry I need to hang up,” she says when we speak. “Yeah. I should probably get around to that today.”

The Danish musician has forged a successful career over the past decade despite – or perhaps because of – her unconventional approach. She grew up in a musically-inclined household in Copenhagen, where her late father was an amateur jazz musician and her mother a talented pianist.

“I didn’t have a childhood like any of my friends who are classical musicians; I didn’t practise for every hour of the day, I didn’t go to the conservatory,’” she says. “There was a lot of music, but it was more scattered – and as a result, I have a much broader musical knowledge. It’s been good that I’ve played some jazz music; I know a bit about jazz, but I haven’t specialised in it. And I played some classical piano when I was a small kid, so I know a little about that. So I feel like I’ve been exposed to many genres, but it’s always been led by my own interests.”

'It seems like you can release music and think it’s the best thing you’ve ever done, but there are so many factors that you have absolutely no control over'

After dropping out of school at 17, Obel’s initial aspirations involved working as a producer. Learning the craft of recording has stood to her when it comes to her own albums, which were all self-produced and mostly home-recorded. She was thirty when she finally released Philharmonics, the album that kick-started her solo career with an understated flourish in 2010. Aventine followed three years later and was accurately described by one journalist as “a wonderful autumn album’.

2016’s Citizen of Glass – a concept album of-sorts – saw her expand her musical palette, with the use of the aforementioned Trautonium synthesiser and vocal experiments. It was also her most successful album from a commercial standpoint, but she says that she has no idea why people connected with it differently.

“It fared much better, but I’m not really good at spotting that sort of stuff,” she admits. “In my opinion, it’s all a matter of chance. It seems like you can release music and think it’s the best thing you’ve ever done, but there are so many factors that you have absolutely no control over. I’ll go mad thinking about it.”

That album did open things up creatively for Obel when it came to making her fourth album, Myopia – which once again, isn’t as heavily dominated by the piano as some of her previous work. “I was felt the piano wasn’t a good representation of the feeling that I felt with the songs on Citizen of Glass” she explains. “On Myopia, I use a little bit more piano although I pitched it down; I don’t know if people can hear that on [single] Island of Doom. Some people say it sounds 80s-like, but I wanted it to sound a bit darker.”

On that note, the synthesiser – or the idea of it, in any case – also played a big part in the musical direction taken by Myopia.

“I really like that sound you get from old synthesisers,” she agrees. “I used a lot of them on Citizen of Glass but [this time] I wanted to see if I could create a similar vibe without a synthesiser; this eerie sort of feeling. So I wanted to work with very few elements that were all organic, so I would use my voice and process it in different ways – like pitching it up, and layering it, and seeing if I could create a similar sound. I did that on two tracks. I learned little tricks here and there to make things sound different, to create a feeling that things are unstable or things feel a little bit off.”

Thematically, she came to a realisation during ‘Citizen of Glass’ that she has carried through to her current work.

'I’m very much motivated by my own interests – and I just have to trust that there are listeners out there who are interested, too'

“Citizen of Glass was also about how things can get skewed and how you can lose track of yourself, in a way,” she says. “Sometimes I have trouble with knowing what I want to do, or if I can trust my own opinion. I think that’s also why I work alone, because as soon as I work with somebody, I just absorb everything they want and I just do that. It’s really annoying,” she chuckles.

“So I need a sort of myopia in order to make anything. But that’s also something I struggle with, because I can go too far and become obsessed with something, too.” She pauses, sighing. “I wanted to make an album where I could create that headspace or state of mind. It’s similar to Citizen of Glass, but it’s more introverted. I wanted it to sound like it’s inside my head.”

She does work mostly alone – previous albums have seen her collaborate on some song arrangements – but her husband, photographer and artist Alex Brüel Flagstad, directs her music videos.

“He follows me while I’m making the album, but we don’t talk about what it’s about – it’s his interpretation of what I’m doing,” she explains. “And he takes it really seriously; I don’t think I could find anyone else that would take it so seriously.”

Like her previous album, the majority of Myopia was recorded at their Berlin home.

“Alex and I moved out of our flat in the middle of Berlin into an old building on the outskirts, and he made a big photo studio and I made a studio for myself on the ground floor,” she says. “It’s actually really small but it’s perfectly balanced. I recorded everything in there – except for one month when I went into another studio.”

She has also found a new home for her music, too. Last year, she signed a new deal with the prestigious Deutsche Grammophon label, which will see her music released on Blue Note Records in the States – a move which would no doubt have pleased her jazz-loving dad.

“My contract with PIAS was ending after the album, and a friend of mine had given my email address to an A&R guy in Deutsche Gramophon,” she reveals. “He just sent me an email and we started talking. They always sign classical musicians, so that made it different to other labels. And Blue Note is a label with a lot of history, so that’s exciting.”

It helps that her profile has been raised through the syndication of her music in various TV shows and films over the last few years. Her songs have popped up everywhere from Grey’s Anatomy to German sci-fi show Dark and video game Dark Souls III, while her song Familiar is the theme to Canadian crime drama series Cardinal.

“It has helped, absolutely,” she agrees. “The reason I ever got to play my first concert in America was because one of my songs, Riverside, was in a TV show [Grey’s Anatomy]. I’m aware that it’s been a big help, but I’m also aware that when you agree to your songs being used in TV series, or whatever, they can lose their independence at some point. I think there’s a difference between having a song in a film and having a song in the title of a TV series; I prefer having it in a film.”

With a new label, a progressive direction and another startling album under her belt, the next few years could prove very interesting for Agnes Obel. Still, given her general laidback demeanour and lack of bloody-mindedness when it comes to her career, it comes as no surprise that she is happy to go with the flow.

“I’m not so good at thinking far ahead,” she admits with a soft sigh. “I recently read an article in The Guardian about how a lot of successful musicians have this career path that they’ve followed, and I realised that I totally never had that and I certainly don’t have it now,” she chuckles. “I’m very much motivated by my own interests – and I just have to trust that there are listeners out there who are interested, too.”