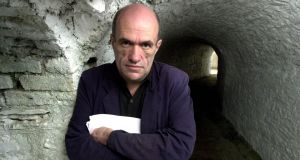 In The Use of Reason, the opening story in Colm Tóibín’s collection Mothers and Sons, the central figure, obviously based on the Dublin criminal Martin Cahill, is a kind of invisible man, a thief who can slip unnoticed into empty suburban houses on quiet afternoons. At work he is a ghost, haunting the homes of other people. But he himself is bothered by a phrase he remembers from somewhere: “Your mind is like a haunted house.”

And what ghosts uninvited into his mind is his period as a boy in an industrial school and how he had survived it by allowing himself “to feel nothing”. He has learned to detach himself from his feelings and experiences, and this detachment gives him the ability to deal calmly in extreme violence. But those memories do break in to haunt his mind, especially an image of abuse that “stayed in his head as though he had taken a photograph of it”. Old photographs, literal and figurative, turn up throughout the collection as messengers from the hidden psyche.

Tóibín deals with divided selves, with the idea that people can compartmentalise their minds so thoroughly that parts of who they are can seem to belong to somebody else. Often what they shut away is the trauma of death: for Eamon Redmond, the judge in Tóibín’s second novel, The Heather Blazing, it is the death of his father; in The Blackwater Lightship it is the approaching death from Aids of Declan; in The South the death of the heroine’s lover Miguel; in Nora Webster the death of the heroine’s husband. Sometimes, as in Tóibín’s luminous summoning of Henry James in The Master, it is homoerotic desire. Most explicitly, in Brooklyn, Eilis Lacey manages to forget Ireland when she is in the United States and to forget the United States when she is in Ireland. Everyone has another persona stored away, like the old photographic negatives in the story Famous Blue Raincoat: “All outline and shadow”.

These divided selves, and the consequent return of repressed emotions, are everywhere in Mothers and Sons. In Famous Blue Raincoat Lisa’s son Luke discovers the old albums she recorded in the early 1970s with her sister and burns them on to a CD.

This resurgence of the past is not welcome: it carries with it the grief of her sister’s death. In A Song, Noel, who has not seen his mother for 19 years, after a bitter family split, encounters her in a bar singing “a song about treachery”. He does not tell her who he is. In A Summer Job a mother watchers her son and realises that his secret self is closed to her. In the novella-length A Long Winter everything in the little Spanish village is watched all the time, and “nothing happened that was not noticed”, yet a woman disappears into mystery.

For Tóibín, who trained as a historian and worked as a journalist – he edited In Dublin and Magill magazines in the early 1980s – this sense that nothing in the self is what it seems has a strong social and historical resonance.

Mothers and Sons was published at the height of the Celtic Tiger boom, when it seemed that the dark Irish past had been put to bed. It would be reductive to see the stories as a direct rebuke to this perception, but the way they enact the return of the repressed certainly has that effect.

The industrial school in The Use of Reason is one revenant. Another, in the beautifully compassionate story A Priest in the Family, is clerical abuse: Molly discovers that her own son is soon to be one of the “priests with their anoraks over their heads” outside courthouses. As in all of Tóibín’s work, the picture in the head has a negative twin hanging in the dark room.