Official Ireland approved of McGahern’s mesmerising debut novel, based on his upbringing in a Roscommon Garda barracks. The banning of its follow-up sent him into exile 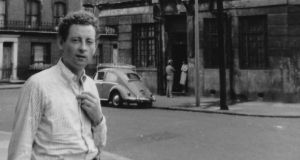 After his mother’s death from breast cancer, when he was 10, John McGahern and his siblings moved into the Garda barracks in Cootehall, Co Roscommon, to live with their father, Frank, who served as sergeant there. A version of that barracks gives its title to McGahern’s astonishingly accomplished first novel, which he wrote when he was still a primary teacher in Dublin.

The Barracks unfolds largely through the eyes of Elizabeth, who has worked as a nurse through the Blitz in wartime England and who carries a sensitivity and sophistication back with her as she convalesces in rural Ireland. There she is smitten by the handsome but uncouth Garda sergeant John Reegan, a widower with three small children, and becomes his second wife.

For Elizabeth the barracks becomes a trap – “Her woman’s days . . . were full and too busy, wanting nothing but to be loved” – that she escapes only through her lingering death from breast cancer.

Reegan, a character based on Frank McGahern, who would appear in other variations in McGahern’s novels The Dark and Amongst Women, is a servant of the State and a kind of image of it. He belongs to the revolutionary generation who fought in the IRA. Now, after 30 years on the force, Reegan is all disillusion and simmering resentment: “He had an intense pity for himself and would fly into a passion of reproaches if he got any provocation.”

Although the novel is not outwardly political, it is surrounded by the sense of a great absence. The heroics of the War of Independence gave way to a State in which there were “new anthems of faith-and-fatherland to beat on the drum of the multitude”, but “unseen and savage behind these floral screens was the struggle for the numbered seats of power”.

The dreamed-of republic has never come into existence, and therefore each family formed its own turned-in, unhappy little republic: “They were so lonely and silent, these flat acres stretching to the rim of the sky, single men and small family groups working alone on their own banks, their voices carrying clear and far . . .”

At the time of its publication The Barracks could be read as an indictment of an Ireland that was being left behind and was thus broadly in tune with official attitudes. It is written with extraordinary emotional finesse and a clean, rhythmic prose that retains its evocative power. (The novelist Deirdre Madden later wrote of it, “The words seem to disappear and you see the thing itself, as if unmediated.”) It was clear that a major new voice had emerged: Kate O’Brien (see Modern Ireland in 100 Artworks for 1938) praised “this subtle, close-woven, tender, true, poetic work”.

McGahern was awarded a Macaulay Fellowship in 1964, which enabled him to travel abroad on sabbatical from his teaching job in Clontarf. But while he was away advance copies of his second novel, The Dark, were seized by Customs and Excise, “pending a decision by the Censorship Board”, and subsequently banned. Its intimations of the sexual abuse of the young protagonist by his father and of the unhealthy attentions of a priest were deemed obscene. McGahern was then effectively dismissed from his teaching post and went into temporary exile.

The affair, alongside the banning of Edna O’Brien’s novels in the same period, dramatised the persistence of profound tensions in Irish culture. The country was anxious to present itself as modernising, cosmopolitan and open. (Ireland had decided to apply for membership of the European Economic Community in 1961.) Its big economic idea was the end of protectionism. But the State was not yet ready to abandon the idea that the people needed to be protected from even their own finest artists.

You can read more about John McGahern in the Royal Irish Academy’s Dictionary of Irish Biography; ria.ie