Mad Men made perfect sense during the swirling disorder 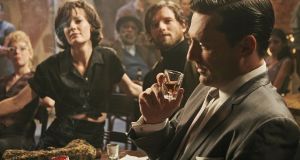 TV propelled us through lockdown. Whether it was the escapism of wine-drunk Real Housewives throwing expensive glassware at each other or the fresh passion of Normal People that captured our heart, myriad shows helped stave off the lingering fear of the pandemic: you just had to find the right one for yourself.

I thought it would be Succession. I thought during quarantine I’d live off the callous zingers provided by the Roy family. I’d swallow down their diet of insults and swears and crude metaphors and be inoculated from the anxiety of the world slowly and nonsensically falling apart. Nothing could hurt me once I kept laughing at Kieran Culkin’s frog-eyed Roman Roy comparing his brother to a can opener. The sight of Brian Cox as head bastard Logan Roy, swaddled in his expensive knitwear like King Lear sponsored by M&S or the world’s most savage Santa, would keep me sane.

The show’s pure cynicism and sarcasm would see me through amid a suspiciously wholesome social media awash with banana bread, succulents and Joe Wicks jumping jacks that all amounted to a panicked yelp of fear. We were filling ourselves to the brim with distraction.

With no partner to jokily threaten to murder during lockdown or flatmate to devise a quarantini with, I was flying solo with just my anxious mind for company. But Succession did not seal the gap in my brain that flooded with horrific thoughts at the most inopportune times. It is a drama that exists in a recent history that is barely recognisable in our weird new world. The truth was, its glorious, beautifully worded cruelty did not offer me the peculiar comfort I sought.

Thankfully there was the reproachful gaze of one Don Draper. I made my way through another Mad Men rewatch, hungrily ripping open stories looking for answers. Mad Men made perfect sense during the swirling disorder of everyday lockdown life.

The backdrop of the chaos and unrest of 1960s America that frames the show – civil rights, the women’s movement, Vietnam, serial killers, cults, violent movies, idealism and radical politics – felt oddly relatable. It’s a series about massive upheaval and change, but there’s a repetitive dull ache, a yearning to return back to “normality” and the safety of the past churning away in the collective subconscious of the show.

The growing pains of the turbulent 1960s is spread throughout Mad Men’s seven seasons with continuous cultural references blasting through certain episodes, but its truth echoes in its quieter moments, showing how these seismic events fall into the background of the characters’ lives. They amount to the constant noise of the TV, the newspaper left on the desk, the blithe anecdote mixed into the mundanity of daily living which mirrored our denial, our numb disbelief at the death tolls sandwiched between a flourless chocolate cake recipe and a Gemma Collins meme on Twitter.

After folding up some washing on the day my aunt died, unable to hug my grieving mother, unsure of how things would develop, not knowing if there would be a funeral, stunned at how quickly the worst had leaked into our lives, I lay down and watched Don tell a cautious Peggy to  “Get out of here and move forward. This never happened. It will shock you how much it never happened.” The speed of life in lockdown made this feel like an eerie warning, with everything happening too quickly to pause and allow yourself to truly feel something, anything.

Jon Hamm’s Don, the “unknowable anti-hero” archetype, had forever eluded me. Mad Men for me was always about the trajectory of its women. But this time the  loneliness of his life, living a lie and the grinding emptiness he feels, concealed by his charisma, felt like a commentary on the performative nature of the self.

Alone during lockdown, I was the proverbial tree falling in the forest with no-one to reflect anything back to me. Hermetically sealed inside my apartment, I felt like a ghost, a stranger to even myself rattling around, surplus to requirements. Whereas Don always had a conveyor belt of women with voices as soft as cake mix to allay his fears, I had strange men on dating apps wondering if they could come to my house during isolation. I was 5km away from impending doom.

This solitude reinforced my wariness of online dating and meeting people in general but, paradoxically, made me crave the warmth of city living. Walking down a street packed with people, bumping into a familiar face and making hasty plans, the unpredictability and serendipity that can sometimes feel almost magical.

If Mad Men essentially became a cold handbook for survival, then High Maintenance became a balm to soothe my soul. It’s a show that is all about the essential goodness to be found within people.

High Maintenance took over my pandemic viewing like a warm bear hug from a stranger at a festival that happens just at the right time. It pushed me from the brittleness of confinement into idly wondering about the possibilities of reuniting with friends, and reignited a sunny hopefulness within me that had previously been snuffed out.

This tragi-comic moment is a simple reminder that no matter how alone we feel, we’re all in this together even if it’s just for an instant

The show, about a freewheeling weed dealer (Ben Sinclair) who pops in and out of the lives of his various customers, overflows with an easy optimism, unlike other paranoid-flecked urban sitcoms. The Guy (as he’s known) is the viewer’s conduit into the private universe of his clients, from craft beer nerds to construction workers to avant garde artists. He is the one thing they have in common, but each character in their own way is searching for a certain connection, seeking out the humanity in each other, grasping at it any way they can.

These vignettes that zoom in on the minutiae of ordinary life reflect the complexity of the human spirit, the struggles and small triumphs of those nameless, faceless people – the coughing neighbour in the flat next door, the invisible office cleaner, the glass collector in the local bar, everyone who gets lost in the rush of us being the star of our own stories.

High Maintenance is an ode to the value and grace in everyone around us. After months of isolation, sentimental speeches about how we depend on each other, now in the post-lockdown world we, like High Maintenance’s characters, must actively fight against being lonely and search for the worthwhile in life.

There’s a scene where The Guy stands looking across at the Statue of Liberty as a group attempt to dispose of someone’s ashes with the wind blowing them through the air and into peoples faces. He gently exclaims, half surprised, “Hey, we’re alive”.

This tragi-comic moment, where grief contorts into farce and strangers become comrades, is a simple reminder that no matter how alone we feel, we’re all in this together – even if it’s just for an instant.

The Comey Rule review: You actually begin to root for Trump