The Éamonn Ceannt papers: ‘I am calmly awaiting the end’

‘My dearest wife Áine,’ began Éamonn Ceannt’s final letter, which he wrote in Kilmainham Gaol the night before his execution

Some 20,000 digitised documents relating to the leaders of the 1916 Rising are to become available. One of which is Éamonn Ceannt's final letter written in Kilmainham Gaol the night before his execution.

Éamonn Ceannt’s final letter, which he wrote in Kilmainham Gaol the night before his execution, is heartbreaking in its finality. At 2.30am on May 8th, 1916, Ceannt, like the other Easter Rising leaders, knew the firing squad awaited him at dawn.

“My dearest wife Áine,” he began, “not wife but widow before these lines reach you. I am here without hope of this world, without fear, calmly awaiting the end . . . What can I say? I die a noble death for Ireland’s freedom. Men and women will vie with one another to shake your dear hand. Be proud of me as I am and ever was of you.”

Ceannt’s message is one of a number of last letters by signatories to the Proclamation of the Irish Republic in the collection of the National Library of Ireland; another is that of Joseph Mary Plunkett. Ceannt’s letter is also one of more than 20,000 items relating to the seven signatories that the library will release online between now and next April.

Given the arguments about which of the signatories were most important, the library is releasing the papers alphabetically: Ceannt’s first, then Thomas Clarke and James Connolly’s, followed by those of Thomas MacDonagh and Seán Mac Diarmada and, finally, those of Pádraig Pearse and Plunkett.

Digitisation has transformed and democratised our understanding of history. Documents that were once available only to historians with the time and money to visit museums and libraries are now available to everybody on the internet.

The numbers accessing the National Library’s recently digitised Catholic parish records has far exceeded expectations, with five million page views so far. An additional 80,000 papers in the Library’s collection have now been digitised.

The seven signatories of the Proclamation left a long paper trail for posterity. They bear exhaustive study because they were people of note – poets, teachers, musicians, journalists, Irish-language revivalists and trade-union organisers – even before they staged the rebellion. They were also sons, husbands, lovers, fathers, brothers and friends. Their correspondence suggests that family was central to everything they did.

It has taken 10 full-time staff two years to catalogue and digitise the documents relating to the seven. There are more than 20,000 items, leading to more than 80,000 scanned images. 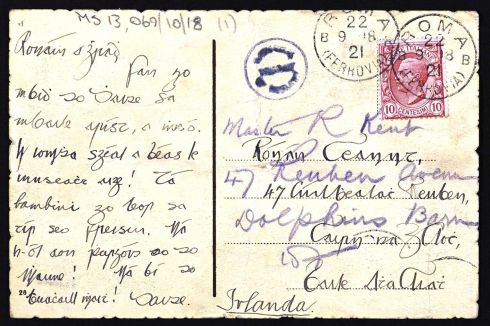 It is one of the most significant cultural projects of the Easter Rising centenary, undertaken despite funding difficulties that the National Library has experienced in recent years. The papers include extensive correspondence from Plunkett and his family, along with the papers of his father, Count Plunkett.

There is poignant correspondence in the archives between Joseph Plunkett and Grace Gifford, whom he married the night before he was executed.*

James Connolly’s union work left a vast paper trail, as did Tom Clarke’s Fenian activities going back to the 1880s.

The collection is expected to attract huge public attention, and not just among the scholars who in the past might have been the only people with easy access to this material.

“We have things that are clearly hugely significant and are moving and engaging for people, like Eamonn Ceannt’s last letter to his wife,” says Katherine McSharry, head of the digital project at the library, who expects the collection to attract huge attention. It is hard to read it and not be moved – or by Joseph Plunkett’s diary in the GPO, which has clearly been written under fire and has that real sense of tangible immediacy. But, to me, some of the most interesting items are the ones that tell a personal or human story.”

Modern scholarship has done much to humanise the Proclamation signatories, whom previous generations had regarded as saints. Although they were remarkable people, they had the same foibles and failings as the rest of us.

Ceannt, who is probably the least known of the seven signatories, can come across as a solemn man in history books, but his letter to his wife-to-be in 1904 demonstrates a keen sense of humour, although one that might not meet with approval in our age of greater gender equality.

“No news to tell at all little girl but to remind you that in a few months’ time, with the help of God, you will have become my prisoner forever more . . . a new little wife you’ll be that first day, owned by a man, bossed by a man, loved by a man.”

He talks excitedly about them buying furniture together for their home, as if they were a contemporary couple about to go to Ikea: “As soon as the real house hunt begins, we’ll have exciting times.”

Ceannt was a cultural nationalist before he was a revolutionary nationalist. He expressed his nationalism through his involvement with the Gaelic League and with Dublin Pipers’ Club. Ceannt was such an accomplished uileann piper that he played for the pope in Rome in 1908.

His pride and joy are evident in a postcard he sent to his son Rónán, written in Irish and in an Irish script. “Tá bambini go leor sa tír seo freisun.” (“There are a lot of children in this country too.”)

Countless other vignettes display the human side of the signatories. Tom Clarke, the prime mover of the rebellion, is known in history for being an uncompromising and unbroken Fenian, but he left a voluminous correspondence with his wife and family. In one letter he writes humorously to his son about buying a special dog to sell tobacco and newspapers at his shop on Parnell Street.

There is a letter in the Pádraig Pearse collection from an irate neighbour complaining about the behaviour of his students at St Enda’s College in Rathfarnham. Another letter from the secretary’s office of Dublin County Council asks Plunkett whether he has paid the motor duty on his motorcycle. “These are the type of gems that nobody would ever see in an archive if we didn’t bring them to the forefront,” McSharry says.

The collection has been almost 100 years in the making. Most of the papers have come from the families, who gave them to the National Library of Ireland for safekeeping. Others the library has bought or acquired over the years.

“Unless you are a historian working in great detail on this period, most of those men are symbols rather than actual people,” McSharry says. “One of the things the collection does is shine a light on all the other parts of their lives that you might not have known anything about. What it tells you is that, whatever your view on the choices they made, they gave up so much. They all had lives; they all had dreams and aspirations. They were interested in their families. It gives a very rounded picture of them and turns them into people.”

The Éamonn Ceannt papers are available from Monday at nli.ie

YA fiction round-up: Debut novel focuses on friendship and love after the Troubles

Andrea Gilligan: A kindly voice among the macho men of Newstalk

The Movie Quiz: What is the only X-rated film to win the best picture Oscar?

Learning to be your true self as a gay man is a lifelong project. These photographs chart mine