Servants and ladies: 100 years ago today in The Irish Times

The Irish Times of November 3rd 1915 was dominated by Britain, war and servants’ positions, while The Irish Times Servant Registry office had recently moved to Westmoreland Street 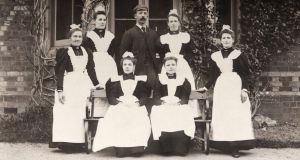 One hundred years ago today, less than six months before the 1916 Rising, The Irish Times reflected an Irish society still deeply embedded in British politics and social norms. The news stories of the day included the sorry tale of a “Shocking motor accident: car goes over a 250 feet cliff with a Lady”. The Lady in question was the 32-year-old wife of Second Lieutenant St John Sampson, an Irishman, who while visiting a lighthouse in Eastbourne fell behind his wife who returned to their car alone and “apparently, accidently set the vehicle in motion”.

His wife wasn’t named but it is reported that when her body was found “her right hand was still clasping a handbag.”

Elsewhere there was much coverage of the recovery of King George, who had fallen from a horse while on parade and on November 3rd was still confined to bed, according to a statement from Buckingham Palace. On the same page there were multiple articles on the war in Europe and a roll of honour listed the names of officers who had experienced casualties, under the headings of Officers killed; Officers accidently killed; Officers suffering from gas poisoning and latterly “Irish regiments, other ranks”.

Perhaps the most enlightening of all is page two of that day’s edition, much of which was devoted to situation vacant advertisements for servants of all station, including parlourmaids, domestic servants, male servants, chauffeurs, cooks and dairymaids. The lists of positions wanted and servants disengaged is fascinating.

Religion and nationality were also factored in with a “superior English infant’s nurse, Protestant” available for placement while a “Young girl R.C. wishs to be trained as a housemaid”.

Some estates still seemed to be financially secure being able to hire rabbit trappers and chauffers, while accomodation was often a welcome perk.

Many of the ads were placed by servants “recently disengaged” but if difficulties finding a position or a servant continued, readers were advised to call to The Irish Times Servant’s Registry which had recently moved to Westmoreland Street. The office opened at 10am for servants and at 11am for Ladies.

For more from our archive, visit irishtimes.com/archive