In search of The Colleen Bawn 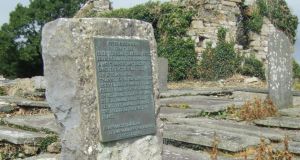 At Burrane Churchyard, the grave of Peter O’Connell is marked by an inscribed flag stone and recently a pillar was put in place with a bronze plaque to commemorate The Colleen Bawn, who sleeps there in peace with him. 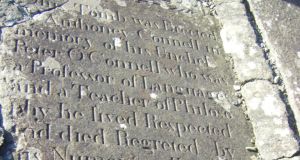 So many stories have been told, in so many ways, about the Colleen Bawn that it is difficult to separate the fact from the fiction. There is the play, an opera, a film, a documentary and a book written about her. Gerald Griffin detailed her tragic story in The Collegians, and Cathal O’Shannon made a very brave effort to untangle the tale in documentary form. Dion Boucicault dramatised it for the theatre and Jules Benedict took Boucicault’s version and changed the location for his opera, The Lily of Killarney. But the story has become so convoluted that you might well wonder if the Colleen Bawn ever existed.

Well, she did. And proof of is in the grave marked as that of Peter O’Connell in the little churchyard at Burrane, Co Clare, right beside the Ferryport at Killimer. Peter O’Connell is the man who sleeps with the Colleen Bawn.

She was born in 1803, in Co Limerick and named Ellen Hanley. Her mother died when she was very young and she was taken in by her mother’s brother and his wife who lived near Croom. By the time she was 15, Ellen had developed into a beautiful young woman, with what her neighbours described as the friendliest, sweetest disposition. She was so innocent and kind that they called her the Colleen Bawn.

In May 1819 she came to the attention of John Scanlan, a young gentleman of some standing. He began to woo her and she was so taken with his charm that she agreed to elope with him. Some form of marriage took place in July of that year in either Limerick or Kilrush (some say Scanlan had someone dress as a priest to perform the ceremony and fool the girl), although there are no records to confirm this.

They had been married only for six weeks when he tired of her. His mother, unaware of his shenanigans, had arranged a match for him that would bring a fine fat dowry which was sorely needed by his family. Scanlan came under severe pressure to extricate himself from his sham vows to the Colleen Bawn and suggested to his manservant, Stephen Sullivan, that he should somehow get rid of her. On July 15th, 1819 Sullivan cajoled her to join him on a boat trip across the Shannon.

At this stage her uncle and his wife were distressed because of her disappearance. Neighbours were called upon to search for her and the news spread like wildfire throughout the country.

The body of Ellen Hanley, the Colleen Bawn, was discovered by Patrick O’Connell on the shore of his land at Moneypoint in Co Clare. It was obvious that she had been murdered. John Scanlan was arrested immediately, charged and, despite being defended by Daniel O’Connell, was found guilty and sentenced to death by hanging. Stephen Sullivan went into hiding and when found some months later he met the same fate.

In the meantime, what had become of the body of the Colleen Bawn?

When all the necessary legal matters were attended to, Peter O’Connell, brother of the man who discovered her body, offered his grave plot to bury her remains. He had recently purchased it at the churchyard of Burrane, Killimer. I know this because Peter O’Connell is one of my ancestors and this story has been told to me umpteen times in the very house where he lived.

He had been a hedge school master, a lexicographer and an avid Celtic scholar who immersed himself in ancient Irish manuscripts and worked to compile a Gaelic dictionary. He was so appalled by the gruesome murder that he offered his grave as the final resting place of Ellen Hanley. He died seven years later in 1826 and was laid to rest with the Colleen Bawn.

His life’s work, the dictionary, remained at his brother’s house until his nephew took it to Daniel O’Connell in the hope of having it published. The Liberator refused to help. The dictionary was then passed from one place to another until it was sold with other manuscripts to the British Museum. There were three copies made of the dictionary and these are in the British Museum, Trinity College and the Royal Irish Academy.

At Burrane Churchyard, the grave of Peter O’Connell is marked by an inscribed flag stone and recently a pillar was put in place with a bronze plaque to commemorate the Colleen Bawn, who sleeps there in peace with him.

The Colleen Bawn by Dion Boucicault, directed by Garry Hynes, is on tour, running in Limerick from February 4th to 8th