A confident reboot of the arcade classic, now free on Playstation Plus 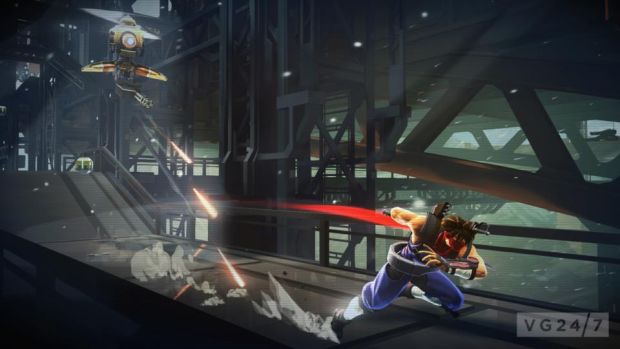 It’s always nice to see an old friend, even if there’s a risk they’ve changed too much in their time away. Strider, a classic arcade game from 1989, has seen its share of sequels, failed reboots and cameos in other games and pop culture. But this is the first time it feels like a real comeback – and one that’s free to Playstation Plus subscribers.

In Strider, you play Hiryu, a futuristic, blade-wielding assassin on a mission to take down a dictator in the city of Kazakh. This involves working your way through security forces, most of which are mechanical (even the soldiers spew wires when they’re slashed) and infiltrating fortresses and cityscapes.

It’s a 2D side-scroller (thankfully, the developers didn’t try to make it a third- person game) in which you jump, slash, slide and swing around, on top of and away from enemies. It could just as easily could’ve been called Slider, Slasher or Climber.

Developer Double Helix (which also worked on the fine Killer Instinct reboot) has maintained the charm of the original’s appearance while tweaking it nicely for a new generation. So there’s lots of neon and lens flare,and a cyberpunk aesthetic. The location design is at once classical and ultra-modern: old brass spires blend with sleek, automated buildings.

There’s an incremental rolling out of skills and power-ups, starting off with jumping and slashing, and then introducing attacks from above and moves with names such as the Slide-assault.

Strider is a challenging, pacy jump-and-slice game. But there is a sense of exploration as well (always welcome in a 2D title), as Hiryu ascends lift shafts, descends through ducts, and climbs walls, roofs, fixtures and ceilings. capcom.com