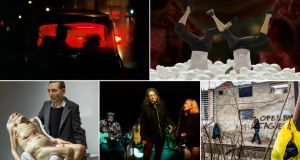 A number of new productions feature in the line-up for this year’s Galway International Arts Festival, which today announces the programme for the 42nd festival, this summer.

Among the new works appearing between July 15th and 28th are the world premiere of Irish National Opera’s Least Like the Other: Searching for Rosemary Kennedy, created by Brian Irvine and Netia Jones, and tracing the difficult life of JFK’s sister; and Druid Theatre’s production of Epiphany, a new play by the Brooklyn writer Brian Watkins, featuring three Tony award winners, including the US actor Bill Irwin.

The festival’s expanded First Thought Talks series has interviews and discussions on the theme of borders – national, gender, political, wealth or health – including by Kate Mulgrew, Mary Robinson, Lydia Foy, Lawrence Wright and Joe Brolly. There’s a sound-and-image fantasia from Alice Maher and Aideen Barry, and a work in development by Sarah Hickson, inspired by people living in direct provision in Galway.

The Abbey Theatre presents Dylan Coburn Gray’s Citysong, and there’s a work in progress of a new musical, Breakfast on Pluto, from Patrick McCabe’s novel, with Landmark Productions. Following the UK premiere, at the Barbican in London, of Rooms, a new immersive theatre installation, Waiting Room by Enda Walsh, premieres in Galway this July. There’s physical theatre, music and puppetry from the UK company Kneehigh, and Rough Magic’s Lynne Parker directs Cleft, a new play by Fergal McElherron.

The festival is again starting work to create a temporary visual-art space in the city, which doesn’t have a municipal gallery and is just eight months away from the start of Galway 2020, its year as European capital of culture. The old printworks on Market Street, where the festival created gallery space in previous years, is no longer available, and the GIAF team has begun to design and build a gallery in a very large garage behind the GPO, just off William Street, an almost secret space in the city centre, which will become a temporary flagship festival gallery. It will feature work by the Australian sculptor Sam Jinks, In the Flesh, which draws on our fascination with the human figure.

Art on the streets will include Guru Dudu’s silent-disco walking tour, weaving through the streets to hits from the 1970s, 1980s and 1990s; and, following Olivier Grossetête’s The People Build construction, last year, there will be another project where the public erect a large-scale piece of architecture in cardboard.

Colum McCann on Israel-Palestine: ‘I was completely ignorant of what was going on’
9