Galway circus may miss Capital of Culture over insurance crisis 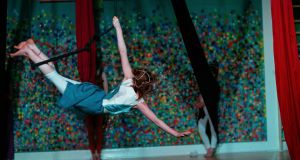 Galway Community Circus: Its Galway 2020 event, Wires Crossed: A Balancing Act for Europe, is in jeopardy

A Galway-based circus due to participate in the city’s European Capital of Culture 2020 may not be able to take part after difficulties securing insurance.

Galway Community Circus, a not-for-profit youth and social circus school in the city, which runs weekly classes and activities for 650 members, cancelled all classes last week when it was refused insurance cover.

“We blanket-called every single broker. We weren’t given full reasons for the refusal. Underwriters won’t take on risks they’ve taken previously, saying payouts in Ireland are big compared to the rest of Europe.”

Last year the circus’s Irish broker quoted double the previous premium of about €10,000, before British broker Rees Astley sourced insurance with Aviva UK. This year it declined cover, and the broker could not find an alternative, citing Brexit complications.

This week, the circus managed to get a quote for restricted cover, through broker IOMST, and partially re-opened on Monday. The cover, however, excludes aerial acrobatics or any activity above 1.5m, a significant portion of its training.

A fifth of its classes are now on hold, and its Galway 2020 event, Wires Crossed: A Balancing Act for Europe, is in jeopardy.

For Ireland’s largest and most ambitious circus spectacle, 400 people of all ages will cross the river Corrib and Claddagh basin on high wires over 2,020 minutes (33 hours) during Galway’s European Capital of Culture.

Galway 2020 is concerned about the continuing insurance crisis, saying circus, street performance and sport are significant in its year-long programme.

Irish Street Arts, Circus & Spectacle Network director Lucy Medlycott said “our members’ policies go up every year, though the claims in our sector have not changed one bit”.

She said Government insurance reform for the sector was “way too slow” and called on local authorities, who benefit from street artists, to “immediately instruct the insurance company they own, Irish Public Bodies Mutual, to cover the activities of our members as an emergency measure while we wait for insurance reform”.

“It makes no sense that the State can support projects in the public interest, but cannot facilitate provision of insurance to them.”

Labour councillor Niall McNelis echoed the call for the council, as joint owner of an insurance mutual, to provide stopgap affordable insurance to community festivals and markets.