Godzilla: King of the Monsters – More cliches than a 1970s disaster movie

Review: The monsters don’t need to eat the scenery, as the main cast have that covered 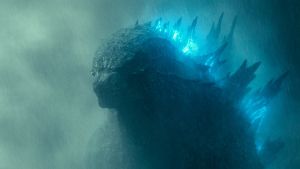 Godzilla: King of the Monsters

“This is the single greatest disaster in human history!”

Steady on there, newsreader. It’s not quite that bad, but there is a sense that this franchise – the “MonsterVerse”, since you ask – is already in the throes of a severe identity crisis.

Gareth Edwards’s Godzilla was too sedate for its own good. Kong: Skull Island was a delightful mash-up of Apocalypse Now and The Three Stooges. Now we descend into mayhem so incoherent one almost (I said “almost”) longs for the notorious Roland Emmerich incarnation to return.

What in heck is going on here? The film does not recapture the knockabout apocalypses of the Toho films that launched the title character so many aeons ago. Nor does it have the cheeky zip of Skull Island.

The tone is closer to those low-end 1970s disaster movies that made ill use of the actor they had to settle for because Charlton Heston was otherwise engaged. Here it seems they couldn’t get Jon Hamm, so they’re settling for Kyle Chandler.

Mini-Hamm is upset because Charles Dance’s eco-terrorists have captured his wife and daughter (Vera Farmiga and Millie Bobby Brown). Meanwhile, various monsters from the deep are threatening to eat each other, non-speaking extras and various bits of the planet. They don’t need to eat the scenery, as the main cast have that covered.

It’s a long time since so many deadweight cliches have been chewed over in such desperate fashion. “We opened Pandora’s Box and there’s no closing it,” Dance scowls with a sonorous boom that even Heston would have trouble matching.

These bits are just fine. Bradley Whitford, Ken Watanabe and David Strathairn make the best of random quotes from Airplane! while dangerous hunks of ceiling crash around their ankles (though poor Sally Hawkins seems to have an eye for the exit throughout).

Less bearable are the numerous sections where everyone sits down to explain the preposterous plot to one another. Some rubbish about balance in the ecosystem and ancient landings by many-headed lizards.

This does, to be fair, lead eventually to partial redemption with a massive closing punch-up between Mothra, Rodan, King Ghidorah and everyone’s favourite nuclear lizard. It’s maddeningly confusing, but they have, at least, allowed Godzilla to again move with the teetering gait of a Japanese man in a rubber suit (to clarify, this is a good thing).

He’s going to need all the grit he can muster. Glimpses of a computer-generated map confirm that the creatures are closing in on coasts throughout the world. One seems to be moving towards Donegal. Don’t fancy that guy’s chances much.

Opens on May 29th