The Guarantee: the unmaking of modern Ireland

‘A bleak portrait of the end of a pocket empire’. Writer Colin Murphy and producer John Kelleher tell Donald Clarke about bringing the story of the most expensive bank bailout in history to the big screen 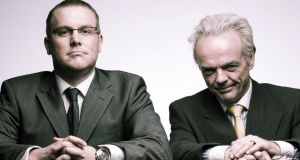 Let’s bail: Peter Coonan as David Drumm and and Morgan Jones as Seán FitzPatrick in The Guarantee

It’s only been six years since the imminent collapse of Anglo- Irish Bank inspired the sitting government to guarantee the holdings of that institution and its competitors. Yet those events have already taken on the quality of myth. The tightening of belts led us to misery, pessimism and, ultimately, the imposition of water rates. It’s a powerful narrative. Much of it may even be true.

Nonetheless, the intricacies of that decision remain obscure to all but the most well-informed economic anorak. This offers some explanation why Colin Murphy’s Guaranteed was such a success when staged by the Fishamble Theatre Company. The play disentangled the economics, made a drama of the events, and offered an outlet for the brewing anger.

“We are still paying for all that,” Kelleher sighs. “I went to the play three times and there was a Q&A each night: a local politician or whatever. The interest was quite incredible, and this was not your typical Abbey and Gaiety audience. They were all inclined at a 45-degree angle and listening well into the night.”

Colin Murphy, a respected, eclectic journalist, remembers something similar happening with the film’s very earliest incarnation. He wrote a short version for Fishamble’s Tiny Plays for Ireland season and sensed that it was triggering “a different kind of laughter”.

He is wary of any suggestion that the full version emerged as a spew of fury. A garrulous individual who can pack four words into the space meant for three, Murphy insists that he constructed both play and film in a sober and focused frame of mind.

“I couldn’t have approached this project driven by anger,” he says. “That’s the Michael Moore approach: diatribe, not drama. It’s perfectly valid, perhaps a necessary part of the overall conversation, but it’s not the point of this play-turned-film.”

What does he make of the degree of attention focused on Anglo Irish Bank? When tapes emerged of the bank’s executives cackling profanely at every disastrous turn, the institution was confirmed, within the mythology, as the entity from which all malignity emerges. Lord Voldemort seems cuddly by comparison.

“Well, it wouldn’t be the first thing I would volunteer about them, but, in response to your question, I would agree that they are carrying a disproportionate amount of the blame,” Murphy says.

“Mind you, for the banking collapse, they should still be carrying about 50 per cent responsibility. AIB should be carrying 30 per cent. That’s off the top of my head. Ask the punters and they’ll say Anglo are carrying nearly 100 per cent of the blame.”

Guaranteed was written before the Anglo tapes emerged, but they remain woven into the piece’s success. The Irish Independent dropped the bomb on the morning the play opened. The last read-through had not been a triumph; Murphy reckoned that, if things went well, they would achieve a noble, worthy, but little-noticed success. It might trigger a few opinion columns. It might even be chatted about in the right bars.

“Then I heard the report on the radio,” he laughs. “And I knew, because I am a journalist, that this would change things. It was quite bewildering, because we were suddenly part of a big story. It was what made the play. A bunch of journalists came to the play and suddenly they were being invited onto the talk shows. Many of them said that a really good way of understanding this story is to see the play.”

For all that, one can imagine that a film version might not have been the easiest sell. The Guarantee (as it became) focuses on a bunch of men and one woman muttering grimly in a number of darkened rooms.

“One of the things in my mind was Four Angry Men,” Murphy says of the live experience featuring David McWilliams, Fintan O’Toole, Shane Ross and Nick Webb. “Fintan and the others were basically doing their book tours. But they packed the National Concert Hall and then moved to the Grand Canal Theatre. If you can get big audiences to hear ubiquitous commentators speak, well . . .”

Tense and blackly funny
As it happens, Ian Power, director of The Runway, has made something tense and blackly funny of the material. Weaving in archival footage, The Guarantee offers a bleak portrait of the end of a pocket empire. We are shown commentators repeatedly reminding us that the boom was sure to bust, and we remember the figurative whistling in the dark that drowned out their prognostications. It’s all rather nauseating.

John Kelleher has been around long enough to know a viable project when he sees one. The piece has been trimmed and streamlined. As Murphy admits, he has – to use a favourite cliché of creative writing – been made to kill a few of his babies.

Legal problems were, however, inevitably going to hang over any such sensitive production. Trials are pending in relation to the Anglo case, and the Directors of Public Prosecution’s office has been keeping an eye on both the play and the upcoming film.

“It’s fair enough that they would be interested,” Kelleher says. “They took an interest in Anglo: The Musical, and I believe they had to make huge changes. We don’t, I believe.

“There are criminal trials in prospect, and the DPP is very firm on ensuring that no trial will be prejudiced by virtue of a jury being influenced by what they’ve seen – whether journalistic or in showbusiness. We are on notice. It is possible that they could seek an injunction. I very much doubt that they will. But you never know.”

It’s hard to imagine what else there is to be told. Since 2008, the Anglo case has spawned whole shelves of weighty analysis. Seán FitzPatrick, the bank’s former chairman, and David Drumm, ex-chief executive, have – most unusually for professional financiers – become national figures. Folk who have trouble balancing their chequebooks are now experts on hidden loans and complex bond transactions. Epic poems will soon be composed.

“Dozens of books have been written,” Kelleher says. “Shane Ross, Fintan O’Toole, Tom Lyons: they’ve all written books. The notion that we could be doing anything that’s prejudicial is an odd one.”

The film-makers are happy to admit that certain license has been taken in adapting the play. As Murphy explains, The Guarantee makes it look as if the politicians decision boiled down to whether you nationalise Anglo or guarantee all the banks. “It wasn’t as simple as that,” he says. Moreover, some actors are playing versions of the real people. Others are playing composites. Some characters are fictional.

“I had a big note on the front of the script: Actors Should Make No Attempt at Impersonation,” he says. “It’s like what David Mamet says about sex on screen. If you show it, all people will be thinking is: is that for real?”

An unhappy comparison in these circumstances. I think I feel a wee bit sick.

The Guarantee is on limited release from Thursday, October 30th, 2014. Live relay of a panel discussion with journalist Matt Cooper will follow screenings in selected cinemas on that day