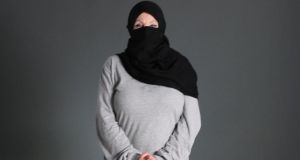 JIHAD JANE ★★★★☆
Directed by Ciaran Cassidy. Featuring Coleen LaRose, Jamie Paulin Ramirez, Lars Vilks. 15A cert, limited release. 94 min
Jihad Jane makes for a head-spinning story. In March 2010, US authorities announced terrorism charges against Colleen LaRose, a blonde, white 50-year-old American who called herself Jihad Jane. The radicalised La Rose was proclaimed the new face of terror, but it got weirder. LaRose, who had been a carer to her elderly mother and her partner’s elderly father, had somehow wound up in Waterford as part of a conspiracy that involved a Colorado woman and a Maryland teenager with Asperger’s. LaRose makes for great company, regardless of her views and a horrifying childhood. She emerges from prison cradling an armful of hand-knit stuffed animals. The film leaves you wondering what she might have been in kinder circumstances. TB

There is a power cut across the area and, when the Sudanese Film Club contact the call centre, they are told that they are No 175 in the queue. They don’t sound convinced. Thus, with their movie viewing plans cancelled for the evening, these four veteran directors re-enact the iconic “closeup” scene from Sunset Boulevard. Throughout this lovely, warm documentary we see clips from their works: the remarkable crosscuts and sound design of Hunting Party (1967), the extraordinary clatter of camel legs from The Station (1968), the thrilling polemic and extraordinary composition of Africa, the Jungle, Drums and Revolution (1979). The quartet, all heavily influenced by Soviet montage and the nouvelle vague, were “retired” when dictator Omar al-Bashir came to power. Talking About Trees follows their exasperating attempts to publicly screen a film outside Khartoum. TB

It’s a strange thing returning to The Lost Boys 33 years after it stormed the box office. Two unnoticed sequels and a cancelled 2018 TV spin-off confirm the film’s uniquely contemporaneous charms. Richard Donner’s original plan was to cast Goonies-aged teenagers as vampires, echoing the Peter Pan allusion of the title. But he left the project for Lethal Weapon, making way for Schumacher, who added such distinctly Schumacherian flourishes as Muscly, Oiled, Gyrating Saxophonist In Skintight Purple Pants (Tim Cappello). And turning the vampires into leather-clad bikers led by Sutherland. A fine vintage cheese reissued for Valentine’s Day. TB

A working-class family invade the home of wealthy snoots in a breakneck farce from the Korean master. There is anger here at the inequalities in society. Bong Joon Ho, who shares screenwriting duties with Han Jin Won, looks to be arguing for the imminence of an apocalypse. What really hooks you, however, is the gorgeous smoothness of the narrative machinery. We get jolts. We are not short of shocks. But, as in all the best farce, the surprises ultimately seem preordained. Surprise Oscar wins for best film, director and original screenplay. Full review DC

“Doldrums. Doldrums,” warns Dafoe’s salty lighthouse keeper. “Eviler than the Devil. Boredom makes men to villains.” Director Eggers (The Witch) has created another distinctly American gothic that blurs the line between deprivation and madness. In late 19th century New England, Winslow (Pattinson) is sent to serve as a wickie on an isolated island under the supervision of the cantankerous Wake (Dafoe). Low-level resentment and bickering spills over into boozy violence and full-blown Oedipal shenanigans. Spiritual advisers ST Coleridge and RL Stevenson cast shadows across the intriguingly murky mythology: DOP Jarin Blaschke is rightly up for an Oscar for his claustrophobic 1.19:1 aspect ratio monochrome. But, ultimately, The Lighthouse stands as a monument to two titanic performances. Full review TB

Singular drama concerning the relationship between a cynical journalist (Rhys) and the US children’s entertainer Fred Rogers (Hanks). Heller, the gifted director of Diary of a Teenage Girl and Can You Ever Forgive Me?, knows exactly what sort of film she is making: one interested in Mr Rogers’s reputation and awake to his odd techniques. But this is really an intimate story about the adjustments we make in middle age. Beautifully made. Skilfully performed. Full review DC