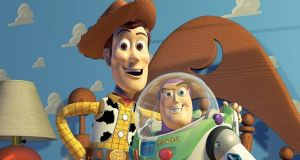 TOY STORY 4 ★★★☆☆
Directed by Josh Cooley. Voices of Tom Hanks, Tim Allen, Annie Potts, Tony Hale, Keegan-Michael Key, Madeleine McGraw, Christina Hendricks, Jordan Peele, Keanu Reeves
Inevitable, wallet-pinching sequel to a series that seemed completed when it reached trilogy status. This time round the toys are on a road trip. Toy Story 4 is better than such late add-ons are normally allowed to be. The jokes are nippy and subversive. The inevitable middle-act chaos is less haphazard than that in Finding Dory. Some long-standing annoyances have been addressed. Bo Beep gets her story. Woody’s status as a narc and a class traitor is undermined. G cert, gen release, 100 min Full review DC

A couple adopt the alien humanoid who lands on their Kansas farm. But he has powers. The film-makers are not pointing just towards the generic traditions of the superhero, but also specifically towards the origin story of Superman. The conceit works brilliantly until, in the closing 20 minutes, Brightburn clatters disappointingly into a fatal uncertainty. Playing very much like a horror film, it gets at the parents’ terrible self-deceptions. Unfortunately, it doesn’t know how to end. 16 cert, gen release, 90 min DC

Gardening mags and blogs describe Piet Oudolf as a “rock star garden designer”. It’s nice to know that there are such things. Best known for the High Line in New York City – that extraordinary walkway across a disused railway – Oudolf certainly swaggers in a way that sets him apart from the folk on Ground Force. Piper’s documentary follows its subject around the world as he develops fascinating and innovative designs. It is lovely, revelatory and relaxing to behold. Club, IFI , Dubln, 74 min TB

Hugely impressive documentary on the legendary footballer from the man who brought us Senna and Amy. As in those films, the images are all drawn from archival footage – the football often filmed muddily at pitch level – with sparse fresh interviews rendered only as audio. Taking Maradona’s time at SSC Napoli as its spine, the picture passes in a dizzying rush that (appropriately, considering the subject) showcases Kapadia’s most stylish edits to date. Essential stuff. 15A cert, lim release, 130 min Full review DC

For most of this impressionist coming-of-age about three biracial brothers and their dysfunctional parents, the siblings might as well be a single wild polycephalic organism growing up, largely unsupervised, in forested isolation. Jonah (Rosado), is the youngest and most individual, an individualism rooted in a growing awareness of his sexuality and the drawings and writings that he keeps in the springs of his bed. Based on an acclaimed novel by Justin Torres, We the Animals is so beautifully made that it feels a bit churlish to criticise its none-more-indie devices: the magic hour photography, dreamy post-Mallick voiceover, cavorting semi-feral children, 16mm presentation and scrappy animations can feel like the Greatest Hits of Sundance distilled into one woozy, hypnotic presentation. Club, QFT, Belfast; IFI, Dublin, 94 min Full review TB

A successful remake of Lelio’s Chilean film concerning a divorcee coping indifferently with bad family and worse boyfriends. Gloria still exhibits more tolerance than most of her associates deserve. She still enjoys dancing and singing along to the power-pop ballads of her young adulthood. Her eventual meltdown is less a fist-in-the-air moment than a quiet-smile-of-satisfaction moment. Moore’s celebrity perhaps gets in the way, but this is still a very satisfactory transfer. 15A cert, IFI, Dublin; Light House, Dublin (Fri/Sat only), 102 min DC Full review

Taken Down: Everybody here had blood on their hands
7