The official trailer for Border, winner of the Un Certain Regard prize at Cannes 2018. Video: Neon 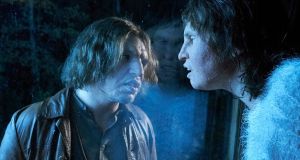 Let the right scent in: Eva Melander (right) in Border

Lisa (Gyllenhaal, excellent) overhears one of her students, a precocious five-year-old named Jimmy (Sevak), recite a poem, which is, in turn, rapturously received at her adult poetry class when she passes it off as her own composition. That’s a cringe-making act of deception, but it’s merely an amuse-bouche for the spiralling, toe-curling obsession that follows. Lisa decides that little Jimmy is a prodigy and she’s going to do everything she can to nurture his talent against a soul-crushing world. A fiendishly ambivalent film that segues from poetry appreciation and midlife crisis drama into thriller. Full review TB

An alien descends to Earth in the 1990s and seeks to make sense of inexplicable memories. It’s a shame the first episode in the Marvel Cinematic Universe with a female protagonist isn’t just a little better. Larson does well enough in a role that would better suit an actor less wedded to underplayed naturalism. The 1990s nostalgia is played for laughs. Sadly, an amusing centre is squeezed into a wafer by a silly framing space operetta that tries the patience. Full review DC

Back in the 1980s, nobody wanted a “girl” on their yacht. Well, at least not as part of the crew. Runaway teenager Tracy Edwards had other ideas. She was persistent enough to gain employment as a cook and a cleaner on various boats before she hit upon the idea that landed her in the history books. Having raised enough money to buy a second-hand vessel, Edwards put together an all-female crew and entered the Whitbread Round the World Yacht Race. The press were bemused or outright dismissive: yachting journalist Bob Fisher called the team “a tin full of tarts”. The women soon proved them all wrong. In common with its subject matter, this is a real crowd-pleaser with a strong finish. TB

The Rock plus The Office and Extras co-creator Stephen Merchant sounds like an unlikely tag-team, but this cheery comedy inspired by the life of Saraya-Jade Bevis (aka Paige) who went from the less salubrious boroughs of Norwich to WWE Divas Champion at age 21, makes for a winning alchemy. It’s hard to argue with the results, however formulaic, and even when the material is thin, Pugh is there to, literally and figuratively, do the heavy lifting. Full review TB

Twentieth anniversary reissue of classic Japanese horror film about haunted video tape. The ghost-delivery system could hardly seem more antiquated now if it made use of carrier pigeons. But the notion of a mad rumour, passed about eagerly by teenagers, makes even more sense in the social media age. Indeed, Ringu (Ring) now seems like one of the most influential films of its era. The overseas release revitalised (and respooked) the horror genre. Full review DC

Other ★★★★☆ and ★★★★★ movies out and about: Can You Ever Forgive Me?, Capernaum, Cold Pursuit, An Engineer Imagines, The Favourite, Free Solo, How to Train Your Dragon: The Hidden World, If Beale Street Could Talk