An Engineer Imagines review: A fascinating study of an Irish pioneer 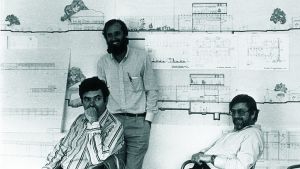 You wait a lifetime for a documentary on a structural engineer and then two arrive in the space of a few weeks – with both on the same structural engineer at that. Feargal Ward and Adrian Duncan’s Floating Structures, which just debuted at the Virgin Media Dublin International Film Festival, is more obliquely concerned with Peter Rice – the genius who helped Sydney Opera House and Centre Pompidou to completion – but Marcus Robinson’s film An Engineer Imagines offers us the full biographical analysis.

Structured around Rice’s book of the same name, An Engineer Imagines is maybe a little short of mathematical detail, but its treatment of its subject’s life and philosophy cannot be faulted. There can be no greater compliment than to say it sends one out eager to learn more.

Born in Dublin, Rice grew up in Dundalk and studied at Queen’s University Belfast and at Imperial College London. He somehow secured a position as site engineer for the Sydney Opera House before his 30th birthday and went on to work with Richard Rogers and Renzo Piano on the Beaubourg. Other structures featuring Rice’s fingerprints include the Lloyd’s building and the Mound Stand at Lord’s Cricket Ground.

Jonathan Glancey, the distinguished architecture critic, whose head talks here, has suggested that he was to structural engineering as Joyce was to literature. To the untrained eye, the work looks more postmodern than modernist, but An Engineer Imagines certainly confirms that Rice was as iconoclastic as his literary predecessor. Distinguished colleagues such as Piano are on hand to confirm the vitality of his contribution.

A man of impeccable taste, Rice would appreciate the job that Robinson has done. The unmistakable tones of Michael McElhatton talk us through the subject’s own musings. The film-makers shift between conventional framing to a faux-aged format – hairs artfully stuck in the gate – that helps summon up the mid-century spirit. Time-lapse further adds to the energy.

Not every argument will work with every viewer. The encomiums to the forbidding science museum in Parc de la Villette did little to persuade this observer. But the teasing out of Rice’s home life is a delight. It’s rare a documentary manages to make an apparently happy existence seem interesting. We’re more easily distracted by flying plates and serial betrayals. The whole man is well served.