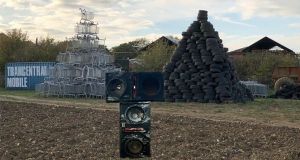 A little bit of urban English magick arrived at the Irish Film Institute on Tuesday night when Paul Duane, a singular director of films about singular people, unveiled What Time Is Death?, his long-gestated study of new activities by the men who used to be KLF.

Three years ago Bill Drummond and Jimmy Cauty, the unclassifiable pop stars and art experimentalists, emerged from relative silence to announce a typically eccentric project. The men who famously burned £1 million on a remote Scottish island, in 1994, were going into the death business.

Working with Claire and Rupert Callender, off-centre funeral directors, they planned to build a huge pyramid of hand-fired bricks, each of which would contain the ashes of a dead person. The process was dubbed MuMufication (referencing the KLF creation The Justified Ancients of MuMu). But was anyone paying attention? Paul Duane used that worry to secure access.

Inevitably, some wiseacre popped up to assert that the KLF didn’t really burn all that money. Gimpo set him right

“Because the media hadn’t picked up on it I used that as a chink in their armour and said: ‘You’ve spent all this time and money, and nobody had written about it. How about I do a documentary?’ They said: ‘Um…?’ I took that ‘Um…?’”

Duane, bearded like a biblical prophet with country’n’western leanings, joined the Callenders and Alan Goodrick, the KLF collaborator better known as Gimpo, for a more than usually lively Q&A after the film.

Inevitably, some wiseacre popped up to assert that the KLF didn’t really burn all that money; Gimpo set him right. But the audience were largely admiring of a fine, odd film about a fine, odd project that aims to bring a new focus to the Liverpool suburb of Toxteth. The first brick contains traces of Simon Cauty, Jimmy’s late brother.

“Lots of people say [the KLF] start stuff and they don’t finish it,” Rupert Callender said. “That’s a really reductive way of looking at it. The fact is the first brick is Jimmy’s brother, and that made it very real for Bill and Jimmy and everyone who is there. This is not something they are going to abandon.”

Do we know where the pyramid will end up?

“They don’t want it in bucolic English hills,” Callender continued. “He wants it somewhere without state support – where the shops don’t sell vegetables. They have history with Toxteth. A lot of Toxteth is deprived and derelict. They are determined that is where it’s going to be.”

Claire Callender talked about how they had been trying, in their business, to bring some significant ritual back to the contemporary funeral.

“That 20 minutes down the crem doesn’t really cut it,” she said. “It has been our life’s work, over the last 20 years, to make the funeral ritual better – more like the Irish one.”

What Time is Death?, made for the Arts Council’s Reel Art scheme, now moves forwards as a satellite of the MuMufication project.

“The only way Bill and Jimmy would allow the film to happen was under the understanding that I had complete artistic control,” Duane said. “And I don’t know of any other film fund that allows that level of control.”

It certainly doesn’t look like the work of anybody else.

Three movies to catch at the festival

British cinema has a rich history of making awkward poetry from miserable family lives. There are some gestures towards Terence Davies’s Distant Voices, Still Lives in Richard Billingham’s feature debut – which has its origins in snapshots of his alcoholic father that appeared in Charles Saatchi’s famous Sensation exhibition – but the film allows even fewer hints of escape. There is little sense that Singin’ in the Rain (or its 1980s equivalent) will provide any release.

We begin with Ray (Patrick Romer) as an old man musing miserably in the West Midlands council house that was once the family home. Think more Samuel Beckett than Alan Bennett’s Talking Heads. We then flash back to the Margaret Thatcher era and find our protagonist in the younger, more stressed form of Justin Salinger. The family just about get by. Their rough lodge bullies one of the younger kids. Everybody smokes furiously.

That scenario suggests a sitcom, and the film does allow moments of gallows humour. For the most part, however, this is a beautifully acted, addictively acidic variation on the theme of despair. Brilliant for those able to take it.

Here’s the big debate of the 2019 Virgin Media Dublin International Film Festival. Which is your favourite divisive film about a self-destructive woman musician: Alex Ross Perry’s Her Smell (Elisabeth Moss in Courtney Love mode) or Brady Corbet’s Vox Lux (Natalie Portman as a much less amiable Lady Gaga)? It works for all tastes. Which did you love most? Which did you hate most?

Your current correspondent is unable to choose between these two excellent dissections of ego under pressure. But the Corbet film is probably the marginally less abrasive of the two (and much the shorter). That’s saying something when you’re discussing a film that, in the style of Lars von Trier, begins with a horrible school shooting that fires the protagonist into creativity. Portman, complete with chewy Staten Island accent, is brilliant in the adult lead. Stacy Martin is even better as her sister. Sia’s songs just about work. Scott Walker’s score is majestic. A majestic double bill awaits.

Fans of Agnieszka Smoczynska’s extraordinary The Lure, the best Polish mermaid film of the decade, will have some idea what to expect from her almost equally successful follow-up. Slipping into a fecund microgenre, the memory-loss drama, Fugue concerns Alicja, a youngish urban woman who, after telling her amnesiac story on television, is reunited with a not entirely welcoming rural family. A family friend is referred to as “Mum”. Attempts to connect are met with little enthusiasm. Gradually, we piece together some explanations for the apparently inexplicable scenario.

The film is very much in the school of grim central European angst. The light is hooded. The emotions are buried behind granite faces. But Gabriela Muskala, also the screenwriter, is insidiously captivating in a role that invites as much puzzlement as sympathy. As the film unfolds it takes on the quality of fairy story, dark mystery and allegorical warning. It knows which questions to answer and which to leave hanging tantalisingly in the Slavic twilight. Highly recommended.