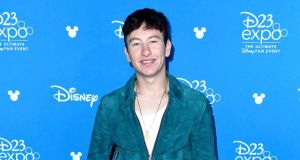 Back in 2013, Barry Keoghan was still very much a domestic phenomenon. That was the year Love/Hate began and Barry earned his reputation as the notorious killer of cats. (Four years later, when I was interviewing him on a balcony in Cannes, an English PR assistant yelled: “Killed any more cats, Barry?” It sticks.)

Anybody with brains in their skull could tell the charismatic Dubliner – who, we should stress, only pretended to kill cats - was shouldering mighty bushels of talent. Few guessed how quickly he would rise.

In January of that year, he tweeted the following to Stan Lee, grand supremo of the Marvel empire: “Stan Lee, Please Make me a SuperHero :)”.

Barry dragged the tweet out this week when he was announced as a cast member of Marvel’s imminent The Eternals. Directed by arthouse darling Chloé Zhao, the picture also stars Richard Madden, Kit Harrington, Kumail Nanjiani and (swoons!) Angelina Jolie. Barry appeared beside Ms J when the cast was revealed at the D23 Expo in Anaheim last week.

Purists will point out that he hasn’t exactly been made a “SuperHero”. Keoghan will be playing the largely evil superhuman known to comic fans as Druig. An occasional KGB operative who enjoys torturing enemies, the character sounds like just the sort of fellow who’d kill the odd cat.

No matter. The tweet suggested the old story about Jim Carrey writing himself a $10 million check in 1985 that, 10 years later, he was able to cash when Dumb and Dumberer landed. Except this was more of a gag. A bit less swagger. A bit less American (even if Jim Carrey is from Canada).

At any rate, the D23 announcement kicked Keoghan many rungs up the ladder and allowed him to get a hug from Dwayne Johnson. “Met my hero @TheRock ....LEGEND.” he tweeted. Involving massive brawls between bad immortals and nicer immortals, Zhao’s film will be with us in November of 2020.

Lost in the flurry

The news about Keoghan’s elevation got slightly lost in a flurry of announcements. Indeed, this was probably the busiest, most moneyed content launch in the history of the entertainment industry.

We are on the brink of a mighty consolidation between Disney’s movie empire – now taking in Marvel, Avatar, Star Wars and the 20th Century Fox associates – and their imminent streaming service Disney+ (a little less imminent in this territory, where no launch date has been set).

By mid-November, US users will have the option to view an array of TV shows whose stories will intertwine with big-screen versions of the same franchises.

A few weeks before Star Wars Episode 9: The Rise of Skywalker arrives in cinemas, Disney+ subscribers will get Werner Herzog in spin-off series The Mandalorian. Yes, you read that right.

The great German director’s voice was the only one heard in the trailer for that eight-episode show. There was no sign of Michael Haneke or Apichatpong Weerasethakul, but maybe they’ll turn up in the live-action Lady and the Tramp.

There was so much material that it took a good two days to churn all announcements out, but here are some points worth taking away. It seems at least Five Star Wars series will end up on Disney+.

As well as The Mandalorian and the seventh series of The Clone Wars, users can enjoy a Rogue One prequel and Ewan McGregor in an Obi-Wan Kenobi romp. The animated Star Wars Rebels is still ongoing.

There will be more Marvel shows than even the hugest nerd could consume. Look forward to She-Hulk, Ms Marvel and Tom Hiddleston in Loki. Debuting in 2021, Marvel’s What If . . . brings together many of the Marvel Cinematic Universe’s biggest stars for a show that will suppose various alternative universes.

The oddest – and thus most welcome – announcement concerned the series WandaVision. Elizabeth Olsen and Paul Bettany return as The Scarlet Witch and Vision in a series that seems to dabble in sitcom tropes. Apparently, the great Kathryn Hahn appears as a nosy neighbour.

Ryan Coogler will be back to direct Black Panther 2 for a scheduled big-screen release in 2022. Away from the franchises, a sizable clip from Pixar’s Onward was unveiled to an enthusiastic audience. Chris Pratt and Tom Holland voice characters in world where elves, trolls and goblins worry about the vanishing power of magic. Onward will be with us in Spring of 2020.

Then, of course, there is Star Wars Episode 9: The Rise of Skywalker. In this world, a weird conflict rages in which all spoilers are banned, but every trailer is torn to shreds for clues as to the upcoming plot.

Questions were, indeed, asked about the teaser. Why are C-3PO’s eyes so red? (Too many late nights at the Mos Eisley Cantina, I’m betting.) What’s up with Daisy Ridley’s Swiss Army-style light sabre? The angry poets of Munster can, however, sleep easy in their beds. Of Star Wars Island there was not a sign.