Saoirse Ronan: bold before her time

At the age of 9 she made her screen debut in RTÉ’s ‘The Clinic’. At 13 she was Oscar-nominated for ‘Atonement’. The Bronx-born, Carlow-raised star truly has been there/done that, which suits her role as an Irish immigrant in ‘Brooklyn’ 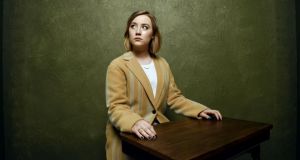 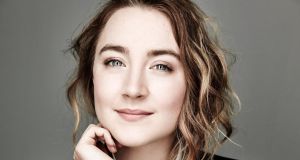 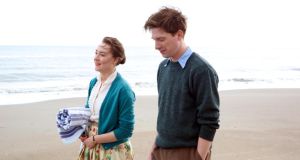 Meeting Saoirse Ronan is not unlike meeting a movie industry veteran. Working out of a central Dublin hotel for interview purposes, she hallos most of the ladies and gentlemen of the press, many of whom she recognises from way, way back.

Scratch that: meeting Saoirse Ronan is precisely like meeting a movie veteran: you have to remind yourself that, despite her young age (21), Ronan’s film credits stretch back some 13 years, a period that has seen the Irish star working alongside Bill Murray (City of Ember), James Gandolfini (Violet & Daisy), and Michelle Pfeiffer (I Could Never Be Your Woman), and directors Wes Anderson, Neil Jordan, Peter Jackson, Gillian Armstrong, Peter Weir, Joe Wright, Amy Heckerling and Ryan Gosling.

She’s enjoyed boffo hits, including The Grand Budapest Hotel and Hanna, and occasional misses: The Host and The Lovely Bones made not much more than their original production budgets. But hey, as veteran Saoirse Ronan notes, that’s movies for you.

“I never felt pressure with a movie like The Host,” she says. “I’m sure the money people did. When it’s an adaptation of a Stephenie Meyer book coming right after Twilight, there’s bound to be pressure. But really, it was never likely to be as stratospheric as Twilight.

“With The Lovely Bones, I was so young. But it did teach me a lot about commerce and campaigns. I think I know a lot more about the business now. I know how fickle people can be. It was a great learning curve. And like everything else: a lot of people love that film and a lot of people don’t.”

She may know more about the politics of filmmaking than she once did, but Ronan, even as a young teenager, has always been pretty on the ball. There’s a clear head behind those clear blue eyes. A self-possessed and softly spoken kid who grew into a self-possessed and softly spoken adult, she has long been the architect of her own career, a profession she chose after watching her actor father at work on films The Devil’s Own and Veronica Guerin.

“It was never a situation where my parents were my managers,” she says. “They’d only ever step in if there was something adult – probably sexual – in the script. Say with The Lovely Bones. It’s about a girl who has been raped, so they had an issue with that. There have been certain situations, when I was younger, when my mam would step in if she felt liberties were been taken on set.

“But it has always been up to me. I’ve never been in something that was decided for me. Mam and dad have been supportive. They trust my judgment. They know that I’m the kind of person that – it doesn’t matter what it is, learning new skills or eating better or working – I can take care of it.”

Saoirse Úna Ronan was born in the Bronx in 1994, the only child of Irish immigrants Paul and Monica Ronan. I do wonder if she would be quite as accomplished as an actor had she emerged from a louder, more populous family unit?

“I’ve thought about that too,” she nods. “I don’t think I would be the same. I talk to myself constantly. And I suspect that’s a very only-child thing to do. My imagination was always my favourite place. I’ve always spent a lot of time in my own head. I also think I got the right kind of attention from my mam and dad.

“I’m the kind of person that can’t bottle anything up. I have to get it out, either in acting or just having a moan talking to mam. I think I’d be different if I had to share my air-space growing up. And also if I had had someone else to entertain me.”

The Ronan family returned to Co Carlow when Saoirse was still a toddler. Still, her trans-Atlantic origins give Brooklyn, a new immigration drama adapted from Colm Tóibín’s novel, an added resonance.

“I can’t stop thinking about Brooklyn,” Ronan says. “I feel like Brooklyn is who I am. It’s the story of how I came to be on this planet.”

It is, additionally, her mother Monica’s story.

“My mam came from Cabra. It’s a small community. And she was one of the first people to leave for New York. So she was like the talk of the town. And when she got there, even though it was the ’80s, it was a big culture change. She remembers she’d go into a deli or cafe or whatever and say hello and they’d look at her like she was nuts.”

Brooklyn is directed by John Crowley (Intermission, Boy A) from a screenplay by Nick Hornby. The film concerns Eilis Lacey (Ronan), a young woman who leaves small-town life in 1950s Ireland for a new life in the titular New York borough.

Eilis’s initial feelings of homesickness are displaced when she strikes up a romance with an Italian-American plumber (Emory Cohen), and settles into work and self-improving night classes. But life becomes complicated when a visit home brings new opportunities, in terms of employment and romance.

Eilis’s passivity and dithering can produce a sensation in the viewer that is not unlike watching a big-breasted horror movie heroine run up the stairs while failing to hit the light switch.

“I’m the type of person who is strong-minded,” nods Ronan. “Once I decide to do something that’s it. But Eilis isn’t like that. She’s reactive. She’s pushed and pulled in all kinds of directions. But we need that so we can see that change in her. It’s only near the end that she finally stands up for herself.

Squeamish viewers should be advised that Brooklyn contains scenes of extreme seasickness and diarrhoea in buckets. It’s not transatlantic travel as we know it.

“I can go to America whenever I decide to for work or whatever,” says Ronan. “It’s easy to forget just how dire and degrading that journey was for earlier generations. Not just for the Irish. For everybody.

“I went to Ellis Island the day after we wrapped and the thing that really struck me was how international this experience is. You notice the amount of African slaves that were brought through there. And then Indians and Germans and Scots all coming through this one gateway to the land of hopes and dreams. That port unified them.”

Brooklyn is still “too raw” for Ronan to have watched the finished Oscar-tipped product. She’s never all that good at watching herself, she says.

“Maybe someday. Years from now. I don’t like looking back. I don’t even like scrolling through texts from more than a month ago. But Brooklyn especially is too personal. And I just don’t like watching myself. I don’t get anything out of it.”

“Well, the only film I’ve enjoyed watching that I’m in is Grand Budapest Hotel,” she laughs. “But that’s because it’s so spectacular. And because I’m not in it that much!”