To research their new film Birds of Passage, Cristina Gallego and Ciro Guerra visited the Wayuu people of northern Colombia to hear their stories of the early days of the drug wars 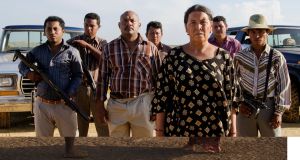 Birds of Passage: ‘We discovered the Wayuu was a matriarchal society. The woman has big power in terms of spirituality and commerce.’

Cristina Gallego, co-director of the brilliant Birds of Passage, is remembering how the drugs business changed her native Colombia in the 1970s and 1980s.

“You see in the film them weighing rather than counting the money,” she says. “That actually happened in the Bank of the Republic. They weighed it. One of the big highways was built 40 years ago. It had six lanes when the highways in Colombia had only two lanes. And this highway led just to a landing strip. None of this was constructed by the government.”

Such stories have made their way into popular culture. They are there in US films such as Blow and American Made. The TV series Narcos goes to those places. Don Winslow’s excellent novels on the drugs war paddles in nearby waters. But Birds of Passage is different.

Set among the Wayuu people of northern Colombia, the picture shows how, beginning with low-level marijuana trafficking, an indigenous family loses its collective soul and mutates into a corrupt dynasty. We begin with ancient rites in a dusty clearing. We end with a soulless mansion inhabited by compromised millionaires. But the spirits remain.

These are the Wayuu community’s own stories. Gallego and Ciro Guerra, her husband and co-director, went among them and gathered tales from a traumatic era. The result is a family epic with touches of magic realism.

“When we started doing the research we had doubts about how they’d react,” Guerra says. “But they were very enthusiastic. Everybody knows someone who was involved. Everybody was enthusiastic about sharing those stories. And the script is built from their anecdotes. We were very respectful to their culture.”

Guerra will be known to cineastes as the director of the hugely acclaimed 2015 release Embrace of the Serpent. Detailing parallel journeys into the jungle by a German ethnographer and an indigenous shaman, the film won raves at Cannes and went on become the first-ever Colombian release to secure an Oscar nomination as best foreign film.

“The story we were telling in Embrace of the Serpent really resounded with people,” Guerra says. “It was something new, but it was speaking about concerns that were universal. It was a film that dealt with spiritual issues. People connected to it in ways that were surprising to us.”

That film’s triumph helped the long-gestated Birds of Passage into production. Gallego and Guerra, who met at university, rode the wave of their own success.

“We heard the stories that originated the script 10 years ago,” Guerra says. “We thought it was a very interesting story and that we’d be able to do it sometime. But it didn’t seem possible then. But the success of Embrace of the Serpent changed that. Only a few years ago we thought the time was right.”

There is no sense that Birds of Passage has an agenda. Dressed in obscure magic, scored to songs that complement the epic sweep over decades, the picture plays as a saga that happens to hinge around the drugs wars of the late 20th century. But Gallego  does feel that some misconceptions are being addressed.

I felt that we need to change the representation of women in cinema. The female perspective was important to me

“We wanted to portray this history in a real and compelling way,” she says. “But one that makes the audience feel empathy and that fights the stigmatisation we feel as Colombians. We are linked in with drug trafficking and with terrorism. We wanted to tie you to the family story instead. We wanted to show the characters were mired in a tragic destiny when this type of capitalism arrived: a wave of drugs and power. There was little they could do to avoid it.”

Birds of Passage also offers education on the gender dynamics of such indigenous communities. The film’s most memorable character is a terrifying matriarch named Úrsula, whose influence survives even the annihilating power of narco-billions. Gallego had served as a producer on the team’s earlier films, but, while investigating this story, she was persuaded that the time had come to slip into the director’s chair.

“We discovered the Wayuu was a matriarchal society,” she says. “The woman has big power in terms of spirituality and commerce. I felt that we need to change the representation of women in cinema. The female perspective was important to me. Male stories of those times tend to be: how much we shipped, how much money we made, how many cars we had. We wanted to shift that on to another perspective and address the destruction of family. That female perspective was important.”

Birds of Passage represents macho culture, but it does not itself exercise a macho aesthetic. That is to say, nobody is likely to confuse it with Scarface or Bring Me the Head of Alfredo Garcia. There is never any sense that the violence is being ramped up for gratuitous pleasure. It exists as a constant subsonic rumble.

Guerra nods along when I mention the various American takes on this material.

“We are taking those elements, but going in a different direction,” he says. “The film refuses to make a spectacle out of violence. There are no real action sequences. The climactic showdown is shown in a long shot from a distance. There is no fast cutting or fast camera movement to make it seem exciting.”

He stresses that he is more interested in how killing alters the man with the gun than in the bloody splatter that results.

“The film doesn’t show many people getting killed. There is some of that at the beginning. But afterwards we focus on the person and the effect it has on them.”

I wonder if there was any resistance in Colombia to Gallego and Guerra addressing this unhappy history. In this country there are still mutters when films set in the northern counties return to the Troubles. There is sometimes a naive belief that filmmakers shouldn’t be dwelling on the less happy aspects of a country’s past.

“There is some resistance to telling this stories,” Guerra says. “There are a lot of people who think Colombian cinema only deals with stories about drug trafficking. And that is not true. But this misconception is fuelled by foreign products. So we were certain that we had to tell something that nobody had heard before.”

He sighs a familiar sigh.

“The only people who complained about it were the people who hadn’t seen it.”

It is always thus.

Birds of Passage is released on May 17th