Laura Madden, Weinstein’s Irish victim: I was No 6 on his ‘secret hit list’

The words ‘very bitter’ were by her name. Weinstein wanted her investigated 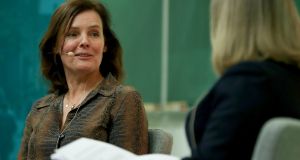 Laura Madden doesn’t see herself as a whistleblower, or a spokeswoman for the #MeToo movement. She would really prefer not to be in the public eye at all.

When she made the decision to talk about what happened to her in a Dublin hotel room with Harvey Weinstein in the early 1990s, she was doing it for young women like her daughters. And she was doing it because “they cannot think that, 25 years later, they still have some hold and control over me”.

“I don’t think, when I started this journey, that I had any idea how predatory Harvey had been. That was a massive shock. Just to see this tumbling out of women’s experiences coming up to the surface was a huge moment.”

We are in a meeting room in Maynooth University, where she has arrived from Wales to be awarded the 2020 President’s Medal for her “innate courage and strength” in deciding to speak on the record to two New York Times journalists, Jodie Kantor and Megan Twohey. She and actor Ashley Judd were the first women to go public with their experiences.

She worries that the media’s interest in the precise details of what happened in that hotel room when she was 22 can border on the prurient; equally, she knows sharing the facts can help people to understand that sexual assault is nuanced, and not just the preserve of “a stranger in a dark alley”.

We agree that I’ll recount what she has already put in the public domain. Weinstein, who was found guilty in February of rape in the third degree and sexual assault against two women and was transferred this week to Rikers Island jail, denies any assault took place.

The details of Madden’s account are, by now, distressingly familiar. There was a request for a massage, and a shower, and escalating sexual demands.

It might even have ended there, if it wasn’t for a Facebook message that came 25 years later. Of course, in reality it never ends there. “I felt complicit in it. I felt I’d somehow brought it on myself. I felt I got the job not out of any merit of my own but as a kind of version of silencing me. It just made my entire career obsolete in my eyes,” she says.

She tried, for years, not to think about it at all. A quarter of a century later, she was at home in Swansea, recovering from breast cancer, and got a Facebook message from a former staff member of Weinstein’s. More messages, and phone calls, followed. “She was sort of trying to influence me into saying how lucky we were to have worked for Miramax. What a great place; what a great boss we had. I said, actually that’s not what I remember. It was a brutal place.

“She kept ringing me back with different carrots. Do you have any scripts you want to bring to Harvey? We hear you’re going through a divorce; can we help? I know you’ve had breast cancer; is there anything you need?”

Madden recognised the approach: a combination of coercion, flattery and fear was how Weinstein always operated. “He got everybody into his room because they needed a job or they wanted their script to be made, and he’s offered it and he’s given it to you. And then it’s like there’s a transaction that has to take place.”

Eventually the staff member got to the point. Had she heard from any “cockroach journalists” who were “sniffing around for stories”?

At that moment, “I said to myself: if somebody rings me, I’m going to talk.”

The call from Kantor came a few weeks later. Madden’s decision to go public was helped along by her two daughters, then 14 and 16. They told her she had to do it on behalf of all the young women who were still being coerced into doing things they didn’t want to.

A recurring question for Madden during her time at Miramax, and one that troubles her even now, was “why can’t I stand up and say this is wrong?”

I lived with such feelings of shame about it

A few months after the story was published, she was being interviewed for a Channel 4 documentary. It was the first time she had spoken about the assault publicly. “They put photographs up of me as a young woman. I just thought, Oh my God, you were so young, and look what happened to you. All that hope.” She becomes upset. She’s not normally emotional about all of this, but sometimes it catches her by surprise.

During the process of exposing Weinstein, she was never frightened for her safety. It was only later that she learned she was No 6 on what became known as his “secret hit list” of 91 film industry figures he wanted investigated by Black Cube, an agency run by former Mossad agents. The words “very bitter” were written beside her name.

In reality, she is anything but bitter. She takes no joy from the prospect of Weinstein in jail –“I think he’s already in hell” – though she thinks the length of his sentence is important for the message it sends.

She wants the conversation to move on now from Weinstein to the question of how we dismantle “the structures and the systems” that allow abuse to flourish; how we protect women and vulnerable people. Having grown up in Monaghan, she was acutely aware of how those structures operate. The Weinstein story “resonates here because of the Catholic Church” and how a blind eye was turned to institutional abuse for decades. The next step for her will be to continue to work for women’s rights, but in a more low-key way. She has signed up to be a volunteer for Women’s Aid.

One of the positives was encapsulated in a text message from her cousin, who said it had been lovely to “watch you become best friends with your very young self again. It did feel like I was finally able to have compassion for that young girl. Because I lived with such feelings of shame about it.”

Indecisiveness led to home of The O’Rahilly being demolished
9