Military Wives: Kristin Scott Thomas and Sharon Horgan play delightfully off one another

Review: Horgan sounds slightly too posh for her character – otherwise this is pretty good 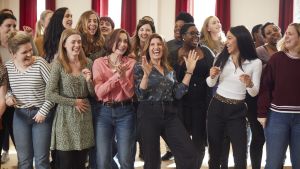 To suggest this cosy flick was by the numbers would be to do a disservice to integers, fractions and decimals. The Oberammergau Passion Play takes more surprising swerves on its way to a less expected denouement. The jokes in Christmas crackers break more conventions.

Still, if we are going to suffer another English People do Stuff film then it might as well be from the originator of the form. When Peter Cattaneo directed The Full Monty, he cannot have imagined he would be responsible for a genre that included nude Women’s Institute ladies (Calendar Girls), suburban synchronised swimmers (Swimming with Men) and warbling trawlermen (the recent Fisherman’s Friend).

Over 20 years later, he returns with a comedy-drama loosely focused on the British soldiers’ partners who – as documented in the BBC series The Choir – healed psychological wounds through the medium of song. It’s all right. Plank A fits into slot B. You crank the handle and the wheels go around. At the end everyone goes home and looks forward to a film in which Geordies recover from PTSD by taking part in roller derbies.

The clash of characters that drives the story will play slightly differently on this side of the Irish Sea. Someone plays Kate, snooty wife of an officer who, after losing a son in Afghanistan, grudgingly joins in bonding activities with the other spouses. Someone else plays the tougher, more rough-hewn wife of a sergeant major. The first eventually softens up a bit. The second becomes a little less bolshie. You know the sort of thing.

Obviously, it being the law, Kristin Scott Thomas plays the officer’s good lady (as she might well put it). Her brittleness adds further poignancy to a grief she is uncomfortable sharing in public.

The mighty Sharon Horgan – about whom we will hear no wrong – probably works very well as the Sarge’s wife if you’re watching in Norwich, but, to Irish ears, she sounds no less posh than the Duchess of Marlborough.

No matter. They play delightfully off one another as part of an ensemble that struggles to make sense of underwritten characters elsewhere. One of the wives is partner to a female combatant. Another swears a lot and likes to follow the football. The rest of the mob barely manage even such single-adjective depth.

If the writers were really doing it by the numbers there’d be a drunk one, a foreign one and a mad one. Cattaneo gets the digits back into the formula, however, for a rousing finale that – as we all knew it would – bounces back from a last-minute setback.