Review: Dan Scanlon’s film is an improvement on his pointless Monsters University 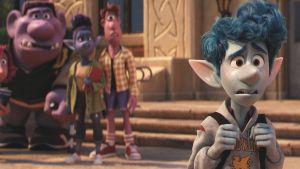 Not too far into this underwhelming new Pixar film, the main character, a weedy elf named Ian (voiced by Tom Holland at his squeakiest) makes a check list of things he would like to do with the late father he has never known. It’s emblematic of how Onward is structured: like a to-do memo. Spielbergian dad-less teens? Check. Teary last-minute realisation? Check.

The 22nd feature from Pixar is set in a world of elves, centaurs, and pixies, where the magic and wonder has been usurped by technological innovation. Why use wings when there are flight deals?

Holland, essaying fanfic variations on their respective characters in the Marvel universe, voices Ian, an awkward teen, and Chris Pratt is Barley, his older, slacker, brother. When the boy’s mother (Julia Louis-Dreyfus) presents them with a magical staff and resurrection spell, a gift from their long-dead father, Barley’s obsession with a Dungeons & Dragons-style game named Legends of Yore, coupled with Ian’s natural aptitude for magic, spirits up the bottom half of their father.

Thus begins a quest to retrieve a magic phoenix stone to complete their late parent before the conjuration wears off at sunset.

There are some engaging moments spectacles along the way, notably a dragon assembled from rubble, a vertigo-inducing bottomless pit and trash-eating unicorns, but the bland main character designs are less than winning. The fantasy beyond is a reliable construct, one that has occupied everyone from Terry Gilliam to JK Rowling, but the magical otherness of Onward has neither the wit of something like Disenchantment nor the sense of adventure of the Indiana Jones films it repeatedly references.

A subplot that teams the boys’ mother with Octavia Spencer’s manticore (a winged lion/scorpion/dragon hybrid) is a grafted-on afterthought.

“Long ago the world was full of wonder and adventure,” says the opening narration. Dan Scanlon’s film is an improvement on his previous directorial effort, the pointless prequel Monsters University. But Onward falls well short of magical.