Hey dudes! The Coens on George Clooney, Hollywood and that Lebowski sequel 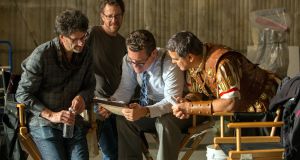 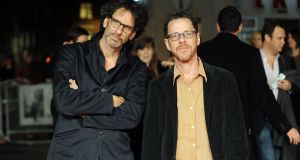 You can put away that dressing gown. Remember those reports from late last year suggesting that shooting had begun on The Big Lebowski 2? Remember how supposedly trustworthy news outlets, including CNN, ran stories with quotes from Joel and Ethan Coen?

Remember the elaborate plot line – the Dude (Jeff Bridges) reunites with his estranged brother (Bill Murray) and best pal Walter (John Goodman) to retrieve the son (Paul Dano) conceived with Maude Lebowski (Julianne Moore) in the 1998 film – that circulated online and beyond?

Remember how John Turturro told this very organ that he was about to go to work on a movie “that [had] some connection to The Big Lebowski”?

Like we said: You can put away that dressing gown. “No, no, no,” laughs Ethan Coen. “That’s no closer to happening than it has ever been. John [Turturro] has been arguing with us for years, trying to get us to do – not so much a Lebowski sequel, but a spin-off about his character in The Big Lebowski. A Jesus movie. I don’t think there’ll be a sequel. I don’t like sequels.”

Joel continues the story: “We did think about one at one time. But purely as a kind of thought experiment in which the Dude and Walter go to Iraq during Operation Desert Storm and they end up in Fallujah. [Actress] Tara Reid likes to announce the Lebowski sequel every now and then. We have heard the announcements from legitimate news sources.”

“Just like George kept announcing this movie over the years,” adds Ethan.

Isn't that a quadrilogy?
George, in this context, is George Clooney, and this movie, following on from O Brother, Where Art Thou?, Intolerable Cruelty and Burn After Reading is Hail, Caesar!, the fourth instalment in the Coen Brothers’ Knucklehead trilogy. Hang on, doesn’t that make it – to use an ugly word – a quadrilogy?

Is there an underlying ethos to the sequence?

“Hmm. It has to be a George Clooney picture,” says Ethan. “And he has to be a knucklehead. But I don’t think that’s an ethos.”

“I think it goes beyond that,” interjects Joel. “With these films it’s as if all bets are off and you can do what you want. You can put the knucklehead in the American south, you can put him anywhere. It’s kind of like the Road to . . . movies [with] Bing Crosby, Bob Hope and Dorothy Lamour. They can go to Rio or Morocco or Hong Kong. And this particular instalment is the knucklehead in Hollywood.”

The same brain
By now you have likely divined that interviewing the Coen Brothers is a bit like gate-crashing a conversation that’s been going on for decades. Unlike fellow filmmakers Mark and Michael Polish (Twin Falls Idaho), Stephen and Timothy Quay (Institute Benjamenta), Albert and Allen Hughes (From Hell) and Danny and Oxide Pang (The Eye series), Joel and Ethan are not twins: at 61, Joel is three years older than his sibling. He looks sterner than his brother, who paces about the London hotel room where I meet them. But they are spiritual and intellectual twins: they finish each other’s sentences and frequently sound as if they share the same brain.

The Minnesota-born brothers are more than capable of solo flight. Ethan, for example, has written short stories and several plays. But they are best known as the hive mind that has written, directed, edited and produced such cult classics as Blood Simple, Raising Arizona, Barton Fink, No Country for Old Men, True Grit and Inside Llewyn Davis.

“Does this count as the Golden Age?” wonders Ethan.

They may not have had the vast resources and personnel utilised during the 1950s, when Hail, Caesar! is set. But working with regular cinematographer Roger Deakins – last seen on Sunday being snubbed once again by the Academy – the Coens had fun recreating the enormous props and synchronised choreography that characterised the era.

“We did as much as we could in camera,” says Joel. “But look, you know, we work on fairly small budgets. It’s far more effective to recreate things digitally. But we did what we could. Those later scenes with the submarine use painted matte backdrop.”

“You look at old Busby Berkeley stuff and you think ‘Wow, you have to do this when you’re actually making a movie,” says Ethan. “And you count the number of dancers. And think holy shit. And you factor the amount of rehearsal for those dancers. There are hundreds of dancers in some of those numbers and they must have been rehearsing for weeks, maybe more. There’s just no way you could do that nowadays.”

Were they ever tempted to shoot the entire film in saturated technicolour?

“What we didn’t want to do – and it has to do with aspect ratio too – we didn’t want to go too extreme,” says Joel. “There had to be some kind of unity to the look of the picture in terms of aspect ratio and colour. We pushed it a certain amount. But we couldn’t go for something really, really in your face. We did talk about that – about going from the movie within the movie to our overall movie – but we decided that we wanted you to feel a bump but not a big bump.”

The mania around Brolin’s Mannix is entirely in keeping with the Coens’ oeuvre and yet this unflappable, endlessly competent central character has little in common with the put-upon shmendriks who typically populate the brothers’ films.

“He’s the straight man with all these flamboyant characters around him,” says Ethan.

Often it’s as if he has more in common with the unseen, and decidedly Old Testament, deity who jerks around the rest of their creations.