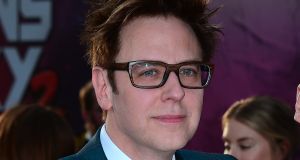 The cast of Guardians of the Galaxy released a letter of support for director James Gunn on Monday, who was fired from the movie franchise on July 20th after offensive jokes he wrote on Twitter were resurfaced by online vigilantes.

Deriding what they called “mob mentality”, Chris Pratt and his castmates said in a letter that James Gunn had their “full support” and that they were “shocked” by his abrupt ouster by Disney, especially since the offending tweets were written “many years ago”. “Each of us looks forward to working with James in the future,” the letter said. “His story isn’t over – not by a long shot.”

Gunn’s tweets – mostly written between 2009 and 2012 – contained jokes about pedophilia, Aids, rape and the September 11th attacks. Two far-right provocateurs, Mike Cernovich and Jack Posobiec, threw a spotlight on the tweets two weeks ago after Gunn harshly criticised US president Donald Trump on Twitter, prompting calls for Gunn to be ousted.

The Walt Disney Company, which controls the Guardians series through its Marvel Studios unit, swiftly fired Gunn, calling the old tweets “indefensible and inconsistent with our studio’s values.” Gunn also apologised. But Disney was quickly condemned in some quarters for reacting to a social media shaming that appeared to have been undertaken as political payback. Gunn’s firing has also stirred debate about how Hollywood should handle transgressions made during a more anything-goes era. As the movie industry seeks to clean up its culture, how retroactively should new standards be applied?

“There is little due process in the court of public opinion,” Pratt and eight of his co-stars, including Zoe Saldana, Bradley Cooper and Vin Diesel, wrote in the open letter. “James is likely not the last good person to be put on trial.” The actors continued, “We hope Americans from across the political spectrum can ease up on the character assassinations and stop weaponising mob mentality.” Noting that Gunn had repeatedly apologised, the cast members also said: “In casting each of us to help him tell the story of misfits who find redemption, he changed our lives forever. We believe the theme of redemption has never been more relevant than now.”

Gunn, 51, has long been an online instigator. GLAAD condemned him in 2012 for making anti-gay and sexist comments on a blog. He apologised at the time for what he called a poor attempt at humour. Despite that history, Disney hired him to write and direct the first Guardians of the Galaxy movie, which was marketed as family entertainment and took in $773 million worldwide in 2014. A sequel, also written and directed by Gunn, collected about $864 million last year. Gunn has lately been consulting on a Guardians-themed addition to Epcot at Walt Disney World.

Since his firing, Guardians fans have circulated petitions online calling for Disney to reinstate him. By Monday evening, one such petition on Change.org had more than 345,000 signatures. The letter released by Pratt and his co-stars did not join the fan petitions in demanding that Gunn be rehired as director of Guardians of the Galaxy Vol. 3, which is set to begin shooting in the coming months. None of the actors threatened to quit. (The other signees were Dave Bautista, Michael Rooker, Pom Klementieff, Karen Gillan and Sean Gunn, who is James Gunn’s brother.)

Disney declined to comment, and is unlikely to reverse its decision to fire Gunn. Doing so would force the company to explain why Gunn’s tweets were less offensive than the racist tweet that prompted Disney to fire Roseanne Barr from “Roseanne” in May.

Working for Disney, which primarily focuses on family entertainment, is also not the same as working for another Hollywood studio. Still, the movie industry has long tolerated vulgar comments and behaviour – particularly from its creative ranks. As the #MeToo and Time’s Up movements have taken hold over the past year, and as studios have moved to an aggressive zero-tolerance behavioural policy as a result, some people are starting to contemplate what constitutes a proper response.

Over the weekend, for instance, Terry Press, president of CBS Films, ruminated on the topic on her Facebook page after the New Yorker published an article in which several women accused Leslie Moonves, CBS’s chief executive, of sexual misconduct in decades past.

“I do not believe that it is my place to question the accounts put forth by the women,” Press wrote, “but I do find myself asking that if we are examining the industry as it existed decades before through the lens of 2018 should we also discuss a path to learning, reconciliation and forgiveness?”

Like the Guardians cast members, Press called for attention to be paid to the “complicated nuances of context” over “the easier path of absolutes”. – New York Times

The Funeral Murders: ‘They were like hyenas ripping their kill apart’
10