Apostasy: A ruthless, brilliant evisceration of the cult mentality

Review: Tale of Jehovah’s Witnesses portrays a world of suffocation and sly indoctrination 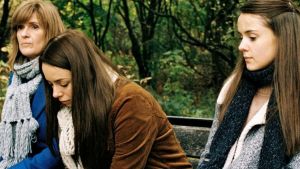 It’s not unknown for films concerning the same subject to open within a few weeks of one another. It is, however, rare for such a particular issue as this – Jehovah’s Witnesses’ prohibition on blood transfusion – to generate two parallel projects. Richard Eyre’s adaptation of Ian McEwan’s The Children’s Act will be with us shortly. Before that we can enjoy (on reflection, that’s probably not the word) a rigorously disciplined treatment of the issue from a director raised within the religion. The transfusion subplot is perhaps a little on the nose, but everything else in Daniel Kokotajlo’s debut feature is chiselled to icy perfection. If this organisation didn’t actually exist the film could easily find itself shelved under “psychological horror”.

The consistently excellent Siobhán Finneran – Sarah Lancashire’s damaged sister in Happy Valley – plays Ivanna, a council employee who has raised two adult daughters within the religion. Luisa (Sacha Parkinson) is showing signs of deviation from the elders’ strict regulations and eccentric theology. Alex (Molly Wright), who has a form of anaemia and feels guilt after inadvertently receiving a transfusion, has learned Urdu to aid her evangelising in that community. We get a sense of the dynamics when Alex, giving a lift to an acquaintance, explains how the passenger’s crucifix is no proper representation of the structure upon which Christ died. The wavering Luisa essentially tells her to give it a rest. Eventually the elder sister encounters a crisis that causes her to leave the community.

Shot in deliberate murk that will not sell this corner of Manchester to tourists, Apostasy is ruthless in its evisceration of the cult mentality. Kokotajlo, brought up in the sect, has argued that he sought to project a balanced portrait, but the fug of suffocation and sly indoctrination leaves us in no doubt as to his views. The cast are so focused in their delivery that the comic absurdity registers only after the credits have rolled. Ivanna speculates about Jesus returning and wonders: “How’s he going to feel if you’re at a college?” During a moment of theological stress, she comforts a daughter with the words: “In a few hundred years we won’t remember any of this.”

The atmosphere of menace is intensified by Kokotajlo’s reluctance to provide any bland motivations for the characters’ interest in a faith that shuns anybody brave enough to break away. The lack of music emphasises the religion’s starkness. The pared-down performances do more of the same.

A disturbing, unflinching debut. One of the year’s best British films.

Hands off the Toy Show: Why the Grinch can’t steal our Late Late Christmas
6