From Skins to Mad Max, Nicholas Hoult knows how to pick a role 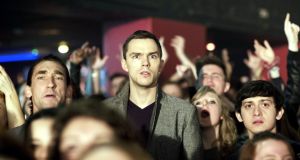 Movie stars just creep up on you sometimes. Nicholas Hoult has yet to be the front-and-forward lead of a box office smash. But he is enormous. Mention his name on the Planet Twitter and entire armies of fans begin marching in your direction. Tom has the Hiddlestoners. Benedict has the Cumberbitches. Nicholas has the Houltaholics.

You can see why. In our faces since he played Hugh Grant’s wee pal in About a Boy, Hoult has a classless cool that – this is England, after all – sits midway between posh Robert Pattinson and working-class Jack O’Connell. No young fan is saying anything about their social attitudes when they take to the Houltahol.

In recent times, there has been a lot of Hoult to go around. Earlier this year, he was terrific as a wild boy in the indecently exciting Mad Max: Fury Road. Last month, he appeared opposite Kristen Stewart at the Venice Film Festival in the futuristic romance Equals. In 2016, he returns as The Beast in X-Men: Apocalypse. Next week, you can see him as a ruthless, psychotic A&R man – the Patrick Bateman of Brit Pop – in the music business satire Kill Your Friends.

Good grief. I’ve just done the sums. I suppose Hoult can barely remember the era in which Kill Your Friends is set. He was, after all, six for most of 1997.

“Not really, no,” he says. “Musically my earliest memories are of a cassette of the Prodigy’s Fat of the Land. I remember being confused, but also loving it. This is strange, but I like it. It was great that we managed to clear that track for the movie.”

He is, of course, talking about the ever-lovely Smack My Bitch Up. That song accompanies one of many scenes depicting behaviour bad enough to appal the characters in I, Claudius. Kill Your Friends, derived from a book by John Niven, comes to the unsurprising conclusion that the music industry is soaked in cynicism, barbarism and corruption. It’s worse than the movie business in these regards.

“Yeah. I think it probably is in that way. In my experience certainly it seems much tougher,” Nicholas says. “The book has these quotes from real A&R men that are very interesting about what they thought was going to be big and what wasn’t. Somebody turned down Radiohead and said that Gina G is going to be the next Madonna. No offence to Gina G.”

“Yes, that’s right,” he says. “Through my dad’s side. I never heard much about her though. There was nobody around who still knew her I’m afraid.”

Hoult’s mother and father met when they were working for British Airways. He first appeared on stage when he was barely able to walk and was put up for auditions throughout his childhood. You won’t need to be told that – like all British actors – he suffered injury in Casualty, illness in Holby City and he risked arrest in The Bill. It was that turn in About a Boy, however, that really made his name. Geeky in a bad woolly hat with annoying stringy bits, he didn’t look much like a future heartthrob. But so it eventually transpired. Following a few more years of treading water – a bit of Judge John Deed; a touch of Waking the Dead – he secured a role in the famously racy teen series Skins.

I wonder what he would say to any other child actor who has a similar early brush with fame.

“The main thing is to enjoy it,” he says. “It has to be fun. Make sure you have a real life around it. Don’t put too much pressure on yourself. I was fortunate to land About a Boy. But nobody then put that pressure on me. Kids aren’t stupid. You’re aware that child stars don’t always make it.”

“I think it was written by people who were close to the age of the characters for once,” he says. “We felt they were realistically represented. Even though it was intense, young people felt: that is more like what we are doing. There were news stories saying: this is horrible; kids aren’t doing that. Which showed that people often weren’t aware what was going on. It was also important that the actors were the right age. You often see these things and the actors are 30.”

It is hilarious how every generation ends up being appalled by the behaviour of the generation that follows. Fifty years after Rebel Without a Cause, the red tops were still able to fulminate about the “decadence” in Skins. Tabloid attention “Yes that attitude dates back centuries,” he laughs. “You have that from way back in history. The kids are going off the rails.”

The nature of fame has changed a great deal over the past decade. Hoult had his fair share of tabloid attention when he dated Jennifer Lawrence, his co-star in the X-Men films, a few years ago. (Understandably enough, he doesn’t comment on such things.) They attended the Golden Globes together in 2014, but broke up the following summer citing a clash in work schedules. That class of celebrity gossip has followed movie stars round for a century. But folk like Hoult must now also deal with (or ignore) the unending stream of chatter on social media. It is no exaggeration to say that at every minute of every day somebody is composing a tweet about Nicholas Hoult.

“What’s my approach? Erm . . . It’s odd,” he says. “There are two schools of thought. On the one hand it’s great to have interaction and conversation. That is a great thing and I can see why it works for some people. I can see the power. But also I like it to be old school. I like it to be about the work. And I like to be as anonymous as possible.”

It helps that he has yet to take up sticks for Hollywood. Raised in leafy Wokingham, Hoult now lives comparatively quietly in north London. Of course, he is rarely there. He spent seven months in Namibia for Mad Max. The upcoming X-Men film took him all over the world. Are producers and agents leaning on him to move out west?

“You know what? I am fortunate in that I can do it all from here. You are obviously on hand if you are in LA. But there is also a strength to not being in LA. In a funny way, what people can’t easily have becomes more desirable to them.”

He becomes mysterious and interesting?

Kill Your Friends opens next week

Hannah Lynch: ‘the most gifted woman Ireland ever produced’
8