Four Weddings at 25: The film that gave us ‘That Dress’, that poem and Hugh Grant the star

Four Weddings and a Funeral was, for a while, the highest grossing British film of all time 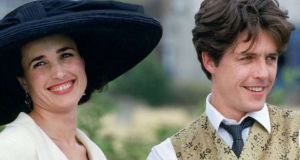 Twenty-five years ago this, um, ah… month, one of the most… I suppose, erm, influential British films ever was… well, not to put to fine a point on it… released.

Do you get it? That was how Hugh Grant spoke in Four Weddings and a Funeral. Richard Curtis’s romantic comedy had its detractors even then. Too many posh folk. Not enough people of colour. But there is no disputing the influence it had on popular cinema and the surrounding culture.

The film’s premiere now looks like the opening fanfare for the phenomenon that came to be known as Cool Britannia (the phrase alone triggers shudders).

It was the evening of “That Dress”. The black Versace number with the safety pins propelled Elizabeth Hurley into every gossip column that mattered. “Sexy Elizabeth Hurley couldn’t have looked less like a blushing bride,” Andy Coulson, later David Cameron’s communications director, wrote in The Sun. “The stunning 29-year-old girlfriend of Four Weddings star Hugh Grant drew gasps and wolf whistles when the crowd caught sight of her breathtaking £3,000 black dress.”

The film went on to become a hit in both the UK and the US. John Hannah’s reading of WH Auden’s Funeral Blues made the poet a bestseller for the first time in decades.

Four Weddings picked up an Academy Award for best picture – losing out to Forrest Gump – and made a star of Hugh Grant.

It was also part of an unexpected shift in British popular culture. The Thatcher years had seen UK music surge – the so-called “second British invasion” led by Culture Club – but there was little accompanying explosion in connected art-forms.

Mainstream British cinema recovered from near annihilation in the 1970s to win Oscars before slowing down again to a gentle trot. The visual arts made little impact outside their own closed world.

The dying years of the Major administration, in contrast, were accompanied by much ballyhoo in these fields and more: architecture, fashion, children’s literature.

Four Weddings and a Funeral emerged in May of 1994. Three months later, Oasis released their first album. The summer after that, the Manchester band found themselves in the headlines when their single Roll With It competed against Blur’s Country House for the number one spot (most pop historians would agree that, though Blur won the battle, they lost the war).

In 1997, Charles Saatchi’s Sensation exhibition confirmed the rising status of such artists as Sam Taylor-Wood, Gillian Wearing and Tracey Emin. Earlier that year, Vanity Fair put Liam Gallagher and Patsy Kensit on the cover beneath the headline “London Swings Again”.

In retrospect, the hype seems faintly absurd. Nobody now seriously sets the cultural advances of that era beside those of the 1960s. What’s the Story, Morning Glory is no Revolver. Damien Hirst is no David Hockney. Four Weddings and a Funeral is no Far From the Madding Crowd, but it did manage to launch a sub-genre that has never gone away.

Some “Richard Curtis films” have nothing whatsoever to do with him: the English bits of Nancy Meyers’s The Holiday could hardly be more Curtisean.

The appeal now seems obvious: nice looking, well-off people falling in love amid well-maintained mews and historic castles. Yet nobody saw it coming in 1994.

Curtis had already achieved a degree of fame as a writer on Not the Nine O’Clock News, Blackadder and Spitting Image. He conceived the idea for Four Weddings as early as 1990, but found it hard to convince producers there was money in that many comic nuptials.

The rising Working Title Films eventually helped elevate the budget to a relatively paltry $4.4 million (to put this in perspective, Notting Hill cost $42 million just a few years later) and they were off.

Mike Newell was hired as director and a relatively unknown fellow called Grant was cast as the bumbling protagonist. It seems inconceivable now, but Curtis had wanted the less dashing, significantly older Alan Rickman.

“I wasn’t really getting any work at all, and then to my great surprise this script came through the letterbox from my agent, and it was really good,” Grant said. “And I rang and said there must be a mistake, you’ve sent me a good script.”

Few films come with so many essential footnotes. Remember that Wet Wet Wet’s version of Love is all Around stayed at number one in the UK charts for a staggering 15 weeks (just three behind the all-time record).

In recent years, political commentators have enjoyed pointing out that future home secretary Amber Rudd – then married to journalist AA Gill – was credited as “aristocracy coordinator” for arranging appearances by the Marquess of Hartington and the Earl of Woolton.

This version of the United Kingdom has always sold well to America. They ate up Upstairs Downstairs a few decades earlier and munched their way through Downton Abbey a bit later. The good people of Cedar Rapids weren’t much interested in the contemporaneous films of Ken Loach.

It helped also that the UK, on the eve of New Labour’s triumph, appeared to be waking itself up from cultural torpor. Hard though it may be to believe, in certain parts of the globe the Curtis aesthetic felt cool.

It also helped that Four Weddings and a Funeral is a darn good film. Though nobody has a bad word to say against Curtis personally, the world he created is often derided as a fantastic theme park for naff reactionaries. There is a little truth in this.

Four Weddings did allow in a prominent gay character – Simon Callow on good form – who also turned out to be (gasp!) working class, but CurtisWorld is conspicuously short of people of colour, humans with ordinary jobs and houses with fewer than three bathrooms.

There is, however, no questioning the craft on display. The jokes are brilliantly worked, the film looks about $10 million more expensive than we know it to be, and the performances are almost uniformly excellent.

Even the much-derided Andie MacDowell works around her tendency towards woodiness to deliver that still-touching final embrace in the rain.

Four Weddings and a Funeral was, for a while, the highest grossing British film of all time. That seems fair enough. Despite the fears of pessimists, the “Richard Curtis Film” did not edge all other schools of UK cinema out of the marketplace.

Next month, Yesterday, directed by Boyle from a Curtis script, opens all over the world.

We are still living in the world that Cool Britannia created. Cope with it.