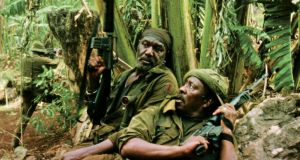 DA 5 BLOODS ★★★☆☆
Directed by Spike Lee. Starring Delroy Lindo, Jonathan Majors, Clarke Peters, Norm Lewis, Isiah Whitlock Jr, Mélanie Thierry, Jean Reno, Chadwick Boseman. Netflix, 154 min
The 23rd film from Brooklyn’s finest is an intriguing, saggy, maddening movie. Borrowing a silly device from The Simpsons, this Vietnam War-inspired drama concerns a tontine, that is, an unlikely stash of gold discovered by the five young soldiers of the title. Decades later they return to the jungle, to bring home the remains of a fallen comrade (Boseman) and dig up the treasure. There is a compelling political narrative here, but it’s buried in lengthy muddle. TB

Aware of American cinema’s perennial duty to drone on about fatherhood, The King of Staten Island follows a young tearaway (Davidson) from the titular locale as he seeks to engage with emotional baggage left by a firefighter dad who died in the course of duty. Like so many of Apatow’s recent projects, The King of Staten Island meanders when it could jog. The tone is all over the place. But, like its unfashionable location, it has a rugged charm that eventually wins you over. DC

Paola is born into an eccentric, well-to-do family. Her father, Uriel, is a former priest who abandons his wife and three daughters to return to his mother in Medellin. Upheavals are everywhere. Power Paola, the name favoured by Colombian-Ecuadorian cartoonist Paola Gaviria, was heavily influenced by the work of Marjane Satrapi, as this delightful, monochrome screen adaptation of Paola’s acclaimed graphic novel readily demonstrates. Gorgeous monochrome lines. A lovely pan-pipe score. A wonder. TB

Arriving on Disney+ a year after its initial release date, clocking in at a suspiciously brief 94 minutes, this expensive adaptation of Eoin Colfer’s hit YA novel – concerning a young master criminal (Shaw, grandson of Robert) – turns out to be a confusing mess. Perhaps wisely, the filmmakers have prioritised those actors who are having the most fun. McDonnell is great as a young elf. Dench has a ball as a senior faerie. But even they can’t save the thing. DC