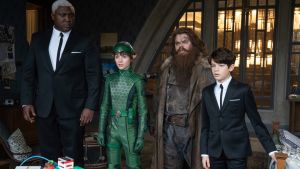 Fantasy fiction has much to do with baleful omens. Ravens are always hovering over gloomy woodland. Wolves are forever howling as carriages approach drawbridges. You know the sort of thing.

It is, thus, appropriate that so many grim portents should precede the arrival of Kenneth Branagh’s Artemis Fowl. The elaborate adaptation of Eoin Colfer’s hit novel was originally due for release in 2019, but, following Disney’s acquisition of 21st Century Fox, it was kicked forward by a whole year.

A few weeks ago, as Covid rearrangements set in, we learnt that, unlike high-profile Mouse House releases such as Mulan or Black Widow, the picture was going straight to stream on Disney+. All of this could be dismissed with the words “weird times,” but the news that a $125-million summer romp was now clocking in at just 94 minutes was harder to ignore.

Branagh has said he always intended the film to be that length, but it somehow looks and sounds as if it’s been hacked down from a longer version. We begin with a sinister agency arresting the huge, hairy Mulch Diggums (Josh Gad) – superficial similarities to Rubeus Hagrid do nothing to dispel unflattering comparisons with Harry Potter – and forcing him to tell them (and us) about the brilliant, Machiavellian title character.

We learn a bit more from a television news sequence. A wee bit later, Artemis reads out excerpts from his father’s diary. Rarely in the history of cinema has so much tortured exposition failed so completely to explain such an undistinguished plot. It is like trying to pick up the story through overheard conversations with nearby drinkers who have just emerged from a screening. Stop telling us stuff and do something!

Much diddly-aye ballyhoo apparently adapted from a bestselling tea towel does get through the fug. If the film were not the work of novelist Eoin Colfer (Wexford), adaptor Conor McPherson (Dublin) and director Kenneth Branagh (Belfast) we’d be accusing them of high paddywhackery.

Elsewhere, for reasons this reviewer failed to establish, an evil hooded figure lurks in a dark space

“The most magical place on Earth – Ireland,” someone eulogises. That “may the road rise up before you” thing plays a crucial part in the story. What to make of the scene in which senior faerie Judi Dench arrives on the old sod and barks “Top of the morning!” – is this a joke about sentimental misunderstandings of Irish culture? Maybe one of the many people telling us stuff could tell us that.

Cursory skims of synopses suggest the novel is a more globetrotting affair. The film is largely taken up with a siege at a mansion in the centre of Ireland. Distressed at the capture of his father, Artemis Sr (Colin Farrell doing his admirable best), the younger “criminal mastermind”, Artemis (Ferdia Shaw), has got hold of Holly Short (Lara McDonnell), an elven reconnaissance officer, and invited attack from Dench’s gruff Commander Root.

Elsewhere, for reasons this reviewer failed to establish, an evil hooded figure lurks in a dark space. The special effects people do attractive work with an underground city — all 1950s pulp science fiction vistas — and busier work with an aerial assault. Patrick Doyle’s lovely score sweeps.

Perhaps wisely, the filmmakers seem to have prioritised those actors who are having the most fun. Shaw, grandson of Robert Shaw, gets few scenes of any great length. But McDonnell has sufficient opportunity to demonstrate a sharp talent that will survive this misfire and take her far.

Meanwhile Dench, McDonnell’s senior by more than 60 years, confirms her determination to make the best of unpromising material. Even she could not avoid embarrassment in Cats, but, dignified in pointy ears, she has an absolute ball with a grumpy senior who looks to have emerged from a faerie ring in the Border counties.

Close your eyes and you imagine her enjoying a sergeant of Guinness and a bag of Tayto’s in the least pretentious of Strabane’s back bars. Who would begrudge her the chuckles?

Correction: an earlier version of this article incorrectly named the adapter, Conor McPherson