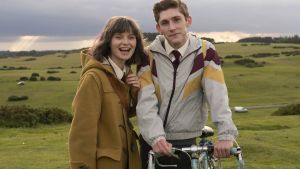 One could teach a class on romantic-comedy structure using David Freyne’s agreeable second feature as sole template. The couple “meet cute”. At first they bicker, but they soon get together.

They reach a deeper understanding. There is a crisis in the final act that risks dissolution and triggers a metaphorical race to the departure gate. You know how it goes. These things are as immutable and inarguable as Commedia dell’arte. If you can think of a better structure then award yourself a big shiny medal.

The trick here is that Eddie (Fionn O’Shea) and Amber (Lola Petticrew) are not really a couple. The two school students are gay and – the original, better title was Beards – fake a relationship to deflect the bullies’ attention. Now they’re just weirdos. It’s a nice conceit and the charming leads squeeze every drop of juice from the pulp. There’s not much formal romance here, but there’s a great deal of love.

Freyne, director of the nifty zombie flick The Cured, has gone back to his own youth for the setting: Kildare in 1995. But the removal to another time promises more context-shifting than the film ultimately delivers. That year’s divorce referendum – passed by a sliver – can be reasonably identified as the point at which Ireland finally turned towards social liberalism. There is potential here for cheap portrayals of a society at the fulcrum. The bullies gain tolerance as Ireland inclines itself towards the millennium. Rainbows over the hills. Blah, blah, blah.

The film-makers wisely resist any such simplifications. Indeed, Dating Amber sustains an equivocal relationship with Ireland’s past and present. The director and his cast have been eager to dismiss the notion that contemporary LGBT kids have it significantly easier than those 25 years ago, and the class of bullying here – cruel but rarely savage – is surely still commonplace.

As is often the case in gay fictions, Eddie is being nudged towards a career that doesn’t interest him. Mum and dad (the endlessly reliable Sharon Horgan and Barry Ward) are not bad sorts, but they are sufficiently blinkered to think Eddie might follow dad into the Army. Amber fights different colours of battles with her own mum (Simone Kirby). For a bit of peace – and who’d blame them? – they decide to fake a love affair.

Romcoms need both connection and friction. The two share a sense of humour and a desire for escape, but, whereas Amber is relaxed with her sexuality, Eddie has trouble actualising his desires. Petticrew (watch that girl!), so brilliant in the recent A Bump Along the Way, slaloms past Manic Pixie Dream Girl temptations to create a character as thoughtful as she is fun-loving. O’Shea, who recently turned stomachs as Jamie in Normal People, returns to the gift for charming frailty he exploited in Handsome Devil.

There are tonal problems here. The class is shown an unfunny video called A Guide to Love Making – nuns talking us through the act itself – absurd enough to belong in a dream sequence. The shift from light to dark towards the close is just too jarring. “This place will kill you,” Amber says as (disappointingly) Small Town Boy doesn’t build on the soundtrack. It feels here as if two different entertainments are being bolted together in the chop shop.

The perfectly aligned performances keep the film aloft in spite of these later hiccups. O’Shea and Petticrew have complete control of the swings in delivery that convey increasing closeness and the alterations in composure that suggest growing tension. Their banter within individual scenes invites us to embrace sacrilege be mentioning names such as Jean Arthur and Jimmy Stewart. We embrace that risk.