Domhnall Gleeson: How is he using his ‘Star Wars’ success?

He’s writing a bawdy comedy with his brother and Michael McElhatton. Who wouldn’t? he asks 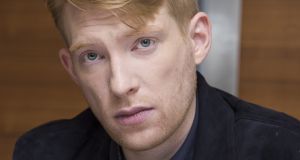 Irish actor Domhnall Gleeson on Goodbye Christopher Robin: “I suspect the reviews will go many different ways. But I’ve seen people weeping in a cinema watching it. That’s hard to do.” Photograph: Vera Anderson/WireImage

Everything’s coming up Domhnall Gleeson. And to paraphrase the title of one of his best-loved movies, it’s about bleeding time. Good tidings we bring: the 34-year-old Dubliner, and son of national treasure Brendan Gleeson, will be impossible to avoid at the multiplex in the countdown to Christmas.

We’ve only just recovered our wits from watching him boss Tom Cruise around in American Made, only to turn around and kill his brother and fellow thespian, Brian Gleeson, in Darren Aronofsky’s relentless mother!

It’s a role the second-gen Gleesons have had a lifetime of practice for.

“We’ve had our arguments over the years,” jokes Gleeson, the older of the siblings. “I’ve never hit him quite that hard. We’ve steadily worked towards this. And now it’s on film forever.”

The critical fallout from mother! has been even bloodier than the Gleesons’s Cain and Abel routine. The controversial film is one of only a dozen movies to receive an “F” CinemaScore from moviegoers, an audience response that prompted home studio Paramount to release a statement defending the project.

Most critics have been rather more tolerant. Others, notably the New York Observer’s Rex Reed, have denounced Aronofsky’s mad, bad allegory as “the worst film of the year”.

Drawing from Ann Thwaite’s literary biography, Goodbye Christopher Robin chronicles the real-life origins of Winnie the Pooh. The Hundred Acre Wood that houses the honey-loving ursine may be an important psycho-geographical destination for millions of readers. But it was a brave new world for our Domhnall.

“I wasn’t a fan before,” he admits. “We had Bran the Dog and a lot of Irish-language stuff. Chicken Licken. Strawberry Shortcake. Only because there was a Strawberry Shortcake book in my grandparents’ house. And that was the extent of my reading until Roald Dahl and Enid Blyton kicked in.

“So I missed out on Winnie the Pooh altogether. That was better for me. This was brand new, I wasn’t going in with any baggage. I wasn’t thinking: how can I fit in all this stuff from my childhood?”

The film, as directed by Simon Curtis (My Week with Marilyn, The Woman in Gold), touches down in France 1916, where the author AA Milne (Domhnall Gleeson) is trying to survive the War to End All Wars, then London, where the writer struggles with shell shock, and eventually Surrey, where Milne and his socialite wife Daphne (Margot Robbie) make for largely rubbish and frequently absent parents to the unfortunate child of the title (Will Tilston).

Thank goodness nanny (Kelly MacDonald) is around to pick up the pieces.

“They were a bit messed up,” nods Gleeson. “It was a different time. And I hope that comes through. They were damaged. He had a lot of trauma.

“War changes people. It changes everyone but it changes some people more than others. They were looking for solace in each other, not in their child. So the child got left behind a little bit. I think that happened a lot during that time. Parents were different with their children.

“Even if AA Milne wasn’t the creator of this famous thing, I still would have been interested in this story, interested that the bridges were bigger to get over in order to really connect with somebody.”

In this spirit Milne is pictured carrying his crying infant son up a staircase rather as if one might hold a pile of dog poo after losing a particularly stupid bet.

“We had a fake baby for some of it, and I’d make sure to fumble him and sometimes drop him,” says the actor. “So when it came time to shoot the scene with a real baby, they said: you know you can’t drop the baby, right? I know! I’m a grown up!”

Not too long after his Strawberry Shortbread period, there were school productions and an early turn as a cabbage-eating cabbage in a play called, well, The Cabbages. At Malahide Community College, he played Doody in Grease and The Fool in King Lear. Still, he remained unsure about following his father into the family business even after both featured film in Martin McDonagh’s 2004 Oscar-winning short film, Six Shooter.

“Exactly, who wouldn’t want that? If Star Wars can be used for anything, it’s that. I do love it. I haven’t had time to do much lately.”

He comically leans into the voice recorder to clarify: “The writing, I mean. Haven’t had too much time for it.”

He’s right about time. Save a lean six months following his turn, aged 19, as a clueless heavy metaller in the West End production of McDonagh’s Lieutenant of Inishmore, Gleeson has seldom been out of work.

In the movieverse, work begets bigger work. Roles in Harry Potter and the Deathly Hallows Parts 1&2 and his current occupation of a Peter Cushing shaped gap in the Star Wars canon have ensured global prominence and cosplay options.

“I’ve never met anyone dressed as Bill Weasley or General Hux, ” he says, disappointingly. “I guess they are not the most obvious ones to pick from those universes.”

Has it checked in on the conventions in character?

“No, no. And then be terribly disappointed when I realise that nobody is dressed up as my characters? It’d look a bit desperate. I’d be letting the side down.”

Oddly, most of the people who come up to him on the street are not doing so for the juggernaut franchises: they’re just big fans of About Time, Richard Curtis’s lovely time-travelling rom-com from 2013.

“I speak to people all the time about that film. And it really means something to them. At the time, when it came out, it was this nice, silly rom-com. But it has lasted. That’s when the work is most satisfying. When it matters to people.

“I really hope Christopher Robin does the same. I suspect the reviews will go many different ways. But I’ve seen people weeping in a cinema watching it. That’s hard to do. Or at least in a way that isn’t just shoot the dog.”

In 2015, Gleeson found himself in no fewer than four Oscar-nominated pictures, including The Force Awakens, Ex Machina, Brooklyn, and eventual winner, The Revenant. How on earth did he manage that?

“It’s not like I picked them all out,” he says. “I guess you look for the best people. If you follow the best people, you can convince the best people to work with you. It’s not always going to pay off. Sometimes good things will happen. And sometimes things don’t come together at all. I do know that I push myself. I work hard.”

He really does work hard.

He lost so much weight – 27lb in seven weeks – for his role in Unbroken, Angelina Jolie’s second World War prisoner of war drama, that the contact lenses crafted for his character no longer fitted. (Post-production, he understandably went “absolutely mental on donuts”.)

While making American Made with Tom Cruise, Gleeson was buzzed by an overhead plane, with less than five metres to spare. For the shoot of Alejandro Iñárritu’s Oscar-winning The Revenant, Gleeson wintered in the remote wilds of Alberta, Canada, where both cast and crew relied on snowmobiles to relay messages and where temperatures rarely made it above -30 degrees.

(His Revenant co-star Will Poulter credits the ever-cheery Gleeson with keeping morale up during the arduous production).

“Unbroken was particularly gruelling because the diet was just so bad,” he says. “But The Revenant was just so long. It just kept going. Being at minus whatever, being in that landscape, getting injuries: over time it added up and snuck up on your body. It was like an endurance test. It’s a different kind of acting. I wouldn’t be looking to do it.

“The only reason you do those things is because it’s necessary for the story or it’s there in the original book. And in those films it was.”

He laughs: “I wouldn’t be going out of my way to do it all over again.”

“I love that she never apologises for that character. It’s a tough character to play. And it’s not an obvious choice to go from Suicide Squad to this.

She’s so individual as an actor. I’ve said before – and I think I’ve really embarrassed her – but I’d love to keep crossing paths with her on different movies down the line.

That way I’d know I was making good choices. Everything she’s in is so different from everything else she has done. She really changes it up. Amazing.”

Don Delillo: ‘Conspiracies have always been on my mind’
9