Bridge of Spies Review: Land of the Free and home of Tom Hanks

In a bumper edition of The Irish Times Film Show, Donald looks at Pixar's latest in The Good Dinosaur and Johnny Depp in Black Mass. Tara Brady looks at Carol and Steven Speilberg cold war drama Bridge of Spies. 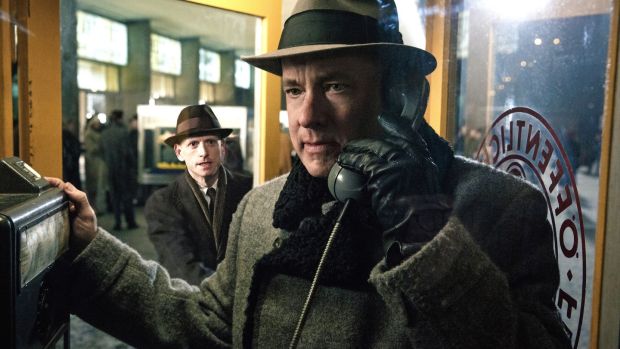 This is not the first film in which Tom Hanks has stood in for The Good America, but it may feature his most comprehensive attack yet on that demanding role. In Steven Spielberg’s irresistible film – close to the best he has made this century – the genial actor plays James Donovan, the lawyer hired to defend Russian spy Rudolph Abel at the height of the Cold War. “Everyone will hate me, but at least I’ll lose,” he wryly remarks.

When the CIA tries to get him to betray attorney-client privilege, he calmly explains that it is such principles that separate America from the barbarians. He believes that Abel (played with delicate grace by Mark Rylance) is as much a patriot as the US cold warriors behind the Iron Curtain.

That equivalency becomes stark when Gary Powers, a US pilot, is shot down in his surveillance aircraft over Soviet air space. Donovan is called in to arrange a swap between the two prisoners. With typical decency, he defies instructions to include a recently detained American student in the deal.

Spielberg will always be Spielberg. The film ends with sentimental swellings from Thomas Newman’s score as the hero contemplates the richness of American life from a train carriage.

Some of the visual flourishes are a little on-the- nose: kids reciting the pledge of allegiance; shots of discarded flashbulbs as Donovan fights his way out of court. But the performances are nuanced throughout and the recreations of post-war Brooklyn and Berlin in the early days of the Wall are lavish to the point of indecency.

This is, of course, the era of Spielberg’s adolescence. He is permitted a degree of indulgence. There’s nothing here we can’t enthusiastically forgive.