Censored 1962 poster to be auctioned in Dublin next month 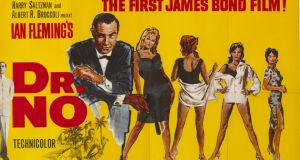 The Irish version of the 1962 cinema poster for the first James Bond film, Dr No, which was censored by having a black dress “painted” on to Ursula Andress to hide her bikini. 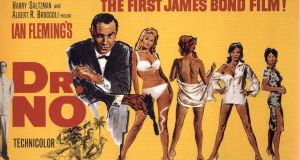 The original Dr No poster, depicting Ursula Andress in a white bikini.

The cinema poster for the first James Bond film, Dr No , was censored in Ireland because the image of a bikini-clad Ursula Andress was considered too shocking for public consumption in 1962.

One of the posters, which was used at an unknown location somewhere in Ireland, has come to light and depicts the actor wearing a black dress that had been “painted on” to hide her white bikini.

The poster is to be auctioned in Dublin next month in a sale of historical memorabilia at Whyte’s of Molesworth Street.

It was printed in England, and copies were sent to Irish cinemas to publicise the film, which was released in October 1962.

Dr No , based on an Ian Fleming novel, starred Scottish actor Sean Connery as British secret agent 007 and the Swiss-born Ms Andress as Honey Ryder.

In the film, Bond travels to Jamaica, and among the characters he encounters is, famously, Ryder emerging from the waves, dressed only in a white bikini, after diving for shells.

To make her look more Jamaican, Ms Andress was reputedly spray-tanned, and her voice was dubbed to hide her Germanic accent.

Auctioneer Ian Whyte said the poster was expected to sell for up to €800.

Ms Andress became famous as a result of the success of the film. The bikini was sold at a Christies auction in 2001 for £35,000.