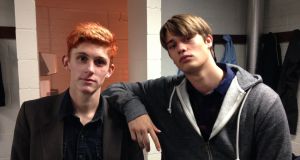 Details of the programme for the 2017 Audi Dublin International Film Festival (ADiff) have been announced. This year’s event, which runs from February 16th until February 26th, will open with the Irish premiere of Aisling Walsh’s Maudie, a study of the Nova Scotian artist Maud Lewis. The closing film will be John Butler’s delightful Handsome Devil. Butler’s comic drama, detailing the relationship between two very different boys in an upmarket Rugby-obsessed school, has already played to rave reviews at the Toronto International Film Festival. That film also has its Irish premiere.

Seána Kerslake, star of recent Irish hit A Date for Mad Mary, joined Grainne Humphreys, ADiff festival director, and Richard Molloy from Audi Ireland at the Hugh Lane Gallery for a photo call on Wednesday morning. Kerslake is on the jury for the ADiff Discovery Award. The programme will be officially launched at the Laughter Lounge on Eden Quay later this evening.

“I’m thrilled with the selection of films that we are bringing to Dublin for the Audi Dublin International Film Festival 2017,” Humphreys said. “To be able to include new Irish films from Aisling Walsh, Jim Sheridan, Emer Reynolds, Aiden Gillen, John Butler, Neasa Ní Chianán, Juanita Wilson and Ken Wardrop as just some of the Irish filmmakers in the festival is an extraordinary testament to the current strength and depth of the Irish film industry.”

Further Irish premieres include that for Jim Sheridan’s much anticipated adaptation of Sebastian Barry’s novel The Secret Scripture. The film stars Jack Reynor, Rooney Mara and Vanessa Redgrave in a tale that stretches back a century. Redgrave will also receive a Volta award, the festival’s honour for career achievement.

The festival is to host a gala screening of Ben Wheatley’s dynamic action film Free Fire. Cillian Murphy, Brie Larson and the ubiquitous Jack Reynor indulge in a vast shoot-out that lasts almost the whole duration of the picture. Wheatley, director of cult phenomena such as Kill List and A Field in England, will be among those on the red carpet.

There will also be a first Irish outing for Alan Gilsenan’s finely wrought Unless. Catherine Keener stars in an adaptation of a Carol Shields novel that addresses a middle-aged woman’s efforts to cope with her daughter’s decision to drop out of college and live on the streets. There will also be much excitement around the screening of Juanita Wilson’s Tomato Red, a tale of the Ozarks from a book by Daniel Woodrell. Wilson, an Irish director who shoots in all corners of the world, received rave reviews for her first feature As If I Am Not There.

This is the 15th edition of the Dublin Film Festival since Michael Dwyer, this paper’s late film correspondent, revived the event in 2003. As well as hosting dozens of Irish premieres, this year’s bash will continue with the always-oversubscribed surprise film. Once again, members of the Dublin Film Critics Circle will host a ceremony honouring the best films and most notable performances.