Judi Dench nominated for for her role in Philomena 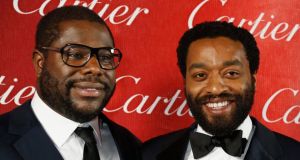 The 71st Golden Globe Awards will be held in Los Angeles tonight with two films vying for many of the key honours.

American Hustle and 12 Years a Slave both picked up seven nominations and the highly regarded films are each expected to triumph in their respective Best Picture group.

The awards will be hosted by Tina Fey and Amy Poehler.

David O Russell’s conman caper American Hustle, meanwhile, stars Christian Bale and Amy Adams as a pair of con artists who find themselves press-ganged into helping with an FBI operation. It was shortlisted for best comedy-or-musical, in addition to the best actor and actress prizes in the comedy-or-musical section.

The two main contenders are only brought together in the directing category, where O Russell and McQueen are bracketed alongside Paul Greengrass (for Captain Phillips), Alexander Payne (Nebraska) and Alfonso Cuarón (Gravity).

Judi Dench has been nominated for for her role in Philomena.

The film, which tells the true story of Philomena Lee’s search for the son she was forced to give up for adoption in Ireland, is also in the running for best drama and best screenplay.

Best acting nominations favoured acclaimed actors with long careers, like 79-year-old Judi Dench for her role in Philomena or Robert Redford (77), the sole cast member as a sailor in All Is Lost.

The Golden Globe nominations, voted by members of the Hollywood Foreign Press Association (HFPA), are a leading indicator for the awards season and underscored the strong year for film, with many critically acclaimed movies and performances jostling for prominence.

The Golden Globes will be handed tonight in Beverly Hills, just days before the nominations for Academy Awards, the highest honours in Hollywood.

While the HFPA can make some unconventional choices, last year’s Golden Globe for best drama went to Iran hostage thriller Argo, which went on to win the Oscar for best picture.

And while 12 Years a Slave and American Hustle compete in separate categories for Globes, they are likely to go head-to-head in the Oscars race for best picture.

The Golden Globes nominations also gave a boost to the new biopic Mandela: Long Walk to Freedom, which premiered shortly before the death of Nelson Mandela. Idris Elba was nominated best actor in a drama for his role as the South African anti-apartheid leader.

Sweeter Than Fiction, One Chance

Robert Redford, All Is Lost

The Wolf of Wall Street

Blue Is the Warmest Colour (France)

Dancing on the Edge

Top of the Lake

Elisabeth Moss, Top of the Lake

Matt Damon, Behind the Candelabra

Michael Douglas, Behind the Candelabra

Chiwetel Ejiofor, Dancing on the Edge

Jacqueline Bisset, Dancing on the Edge

Rob Lowe, Behind the Candelabra