The late essayist, once denounced by a papal nuncio as a dangerous communist, has the last laugh 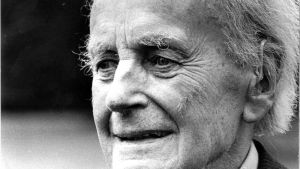 In 1952, while attending a lecture in the Rotunda, Dublin, about the persecution of the Catholic Church by the Yugoslav communist regime, essayist and market-gardener Hubert Butler reminded the audience about the Catholic treatment of the Orthodox in Croatia, and the massacre he had recounted in Father Chok and Compulsory Conversion. The papal nuncio walked out, and Butler was soon denounced as a dangerous communist. The apostolic protester would have done well to sit back down, for the erudite Butler had plenty of wisdom to impart. Butler, a translator of Gogol and Chekhov who helped smuggle Jews into Ireland from pre-war Vienna, is finally, deservedly in vogue some 26 years after his death. Johnny Gogan’s thoroughly engaging documentary makes great use of lately declassified documents and location. A parade of compelling contributors – including biographer Robert Toibin and Hubert’s daughter Julia – turn out to be what the Avengers are to the Marvelverse. Marvellous.

A Very British History: ‘I heard chants supporting the IRA. My blood boiled’
9

Berthe Morisot: the woman in vanguard of Impressionism
Real news has value SUBSCRIBE