Cathal Coughlan: On My Cultural Radar 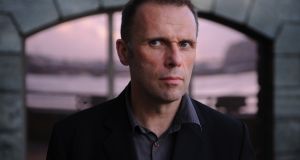 Singer Cathal Coughlan: ‘I can watch Isabelle Huppert in anything.’ Photograph: Bleddyn Butcher

The best thing I’ve read in the last few months is Sinéad Gleeson’s Constellations. It’s profoundly moving and relates to a lot of topics I can relate to strongly, namely illness and the effect on the body. And I’m not a parent myself, but I found the writings on her relationship with her children really compelling.

I admire Marc Maron. It’s his self-torture, and his willingness to admit all manner of uncomfortable truths about himself and still make them funny. I enjoyed his sitcom, Maron, that ran for four series but was cancelled in the end.

I don’t tend to go to exhibitions because in London, where I live, they tend to be horribly oversubscribed. But I was taken by Gerhard Richter’s photorealistic oil-on-canvas painting of his wife’s back from 1993, which was on display at the Whitechapel Gallery, near where I live. Anything that depicts somebody’s physical state is, by necessity, depicting something which is in flux and will never look the same again. I also went to Cindy Sherman’s exhibition, and she’s one of the people I really love. She’s a multimedia artist who specialises in photographs of herself portraying different characters. She can be anything from a 1950s independent woman arriving in the big city, or a fully-clothed but soft-porn model. Sometimes she doesn’t even look like a human being. You can’t help but respect the achievement of someone who was doing this when no one else was.

Music is swamping itself because of the change in medium. But right now, I’m listening to a Margate band called Gang. I saw them play the other night and they’re great – it was a bit like watching Genesis jamming with Crass. I like Daniel O’Sullivan’s album Folly; he’s doing things that are really interesting, using materials that are readily to hand. I also liked The Delines’ The Imperial, and Solange’s When I Get Home.

Because I live in London, I’m strongly disenchanted about visiting a city to do what you could basically do on Google Street View. But I went to Oxford for the first time in about 25 years and I enjoyed it for an afternoon. I saw The Bodleian Library and inside of some colleges, courtesy of a family friend.

I can watch Isabelle Huppert in anything. I recently watched her in Things to Come by Mia Hansen-Løve, which was good in an unassuming way. It was bit “French bourgeoisie sitting around a dinner table” but that’s okay in moderation. Isabelle is unafraid of appearing unsympathetic and unglamorous – there’s a lot of preening self-absorption from English-language actors these days. I also like Ireland’s own Aidan Gillen. No one does brooding menace quite like him.

Preet Bharara’s Stay Tuned. He was the district attorney for the southern district of New York until Trump fired him for partisan reasons. He breaks through current affairs, quite often in the US, in a way that’s not hysterical but forensic in the best sense of the term. Unlike a lot of others, he doesn’t try to fool the listeners into thinking “one more push and the baddies will be gone”. He also presents a series with Anne Milgram, who was a federal prosecutor too. They work very well together as leading minds.

I’m working my way through Rainer Fassbinder’s back catalogue. A highlight so far as is Veronika Voss, which depicts the sleazy underbelly of west Germany in the years immediately after the war. I’m obsessive about those years because the perception is that Germany changed itself overnight after the war, but the reality is complex and messy. This film is about a performer trying to rebuild her life, but it’s an ideal way of exploring the atmosphere that might have existed.