Trouble Songs review: a sociological analysis of the North’s soundtrack 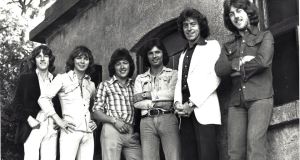 The Miami Showband: in July 1975, three members of the band were killed as they returned home to Dublin after a performance in the North, shot at point-blank range by members of the UVF.

Derry, 2013. The city was having a ball as the UK’s first City of Culture, and Teenage Kicks provided the soundtrack. A lyric from the song was displayed in lights on the roof of a riverfront building; in Foyle, the local BBC radio station, it was emblazoned outside the studios. There was even a musical.

The Undertones story is a famous one. John Peel played Teenage Kicks twice in a row on his radio show, and suddenly they were on Top of the Pops.

Nothing in the song references the Troubles, but author Stuart Bailie is in no doubt. “Even the decision to have fun during those wretched years was a political act,” he writes.

From punks to popstars, protesters to peace campaigners and rebels to showbands and marching bands, theirs are Trouble Songs.

From the first strains of We Shall Overcome, sung at the first civil rights marches in 1968, to Bono’s appearance onstage with John Hume and David Trimble at the “Yes” concert three days before the referendum on the Belfast Agreement in 1998, this is as much an alternative history of the Troubles as it is a chronicle of its music.

In an early chapter, Eamonn McCann recalls the joy of watching from the attic window of his home in the Bogside as people sang and danced to Bill Haley’s Rock Around the Clock in the middle of the street.

The “cottage industry” of songs inspired by political events – most notably The Men Behind the Wire, released in 1971 following the introduction of internment – is also recorded, as well as Belfast loyalists’ disturbingly sectarian version of the famous “I’d like to buy the world a Coke” advertisement.

In this, Bailie is courageous. In what might easily have become a chronology of amusing anecdotes or music industry gossip, he acknowledges that, in Northern Ireland, “music has been used to celebrate killings and condone sectarian acts”. Equally, he admits that “there were, lest we forget, so many unbelievably bad pop records about the conflict that we can only hope they have been disarmed, forever.”

This is no hagiography. It is well-known that many in Derry “detested” U2’s Sunday, Bloody Sunday; in Northern Ireland, Stiff Little Fingers (SLF) were at times “fiercely disliked” because their music was felt to be “contrived and melodramatic, making capital from the conflict”. Yet, Bailie notes, people “listened to lyrics like Wasted Life and Suspect Device and they made a decision to step away from paramilitary organisations”.

In a statement which might easily be regarded as facile coming from someone less qualified, he writes: “It’s fair to suggest that scores of people in Northern Ireland owe their lives to a bunch of scratchy, shouty tunes.”

Perhaps most powerful is the section on The Miami Showband massacre. In July 1975, three members of the band were killed as they returned home to Dublin after a performance in the North, shot at point-blank range by members of the UVF – some of whom were also soldiers in the Ulster Defence Regiment (UDR) after they stopped at what appeared to be a British military checkpoint.

Bailie quotes survivor Stephen Travers: “Every musician that ever stood on a stage north of the Border during those decades, every one of them was a hero.”

A music broadcaster and journalist of some 30 years standing, Bailie is at his strongest when writing about punk, the soundtrack to his own teenage years in Belfast. That first-hand knowledge, and genuine passion for his subject is evident in these chapters, which are written with all the verve and energy of a punk record.

“Jake Burns sang the lyrics in a hurry,” he writes of SLF’s Alternative Ulster, “like a guy in a phone box with no spare change.”

Yet even writing about his beloved punk, Bailie is nuanced, and always realistic. He quotes Brian Young of Belfast punk band Rudi: “It’s wholly inaccurate when people state blithely that all punks were non-sectarian. That’s simply not how it was.”

This is a social history as much as a musical one. Bailie charts the bombing of cabaret clubs and bars in Belfast, which took the heart out of the city and left punk without a home. In north Belfast alone, Bailie counts 32 bars which were burned or bombed out in the early Troubles, and he emphasises the impact this had on music and on the youth scene.

“You would turn up even somewhere like Dungannon,” says Greg Cowan of The Outcasts, who toured Northern Ireland in 1979. “There was no nightlife. Police stations looked like military encampments. Cinemas were all bombed . . . the whole town would come.”

Today Belfast bar the Harp – which became the Belfast home of punk – has a plaque on the wall outside; tracks like Anthony Toner’s Sailortown talk of the “graffiti fading” from the walls and the “urban renewal and apartment blocks” which are replacing it.

If Teenage Kicks was a marker of how far Derry had come by 2013, then so too was Just Say Yes – the official song of the UK City of Culture. The lyrics – “Just say yes/Just say there’s nothing holding you back” – chimed with a city in transformation.

If music was once an act of political rebellion, then it has also become part of the peace. “The punk rockers, ravers and rogue strummers have all done their job,” writes Bailie. As has he.

Freya McClements is a writer and journalist based in Derry