Short story: Belinda McKeon’s story for our This Means War series marking the centenary of the start of the first World War 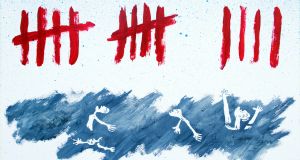 First, your pets. Six months ago, you would drive miles to buy the special food, the food marked SCIENCE and CLINICALLY PROVEN and KIDNEY FUNCTION –

Six months ago, you were a bloody fool.

See also: your children. Hopes for, dreams for, love for, names –

Their names (you insist, it turns out, upon retaining this) were H and R and W. Their ages were 12 and nine and seven. You spaced them out; you planned them well.

No longer relevant: your plans. Your plans, for instance, on the matter of H’s school, his second school, the school he should have, would have, been starting around now –

(Would it be around now? Is it then, now? Has the year staggered on to that season?)

(Every day is like every day. The noise, the sky, the silence. Now the nights come earlier, now that you think about it, which means that it must be almost September – )

(But September is not a thing that you need to think about any more.)

H’s school: would it be your school, the school you taught at, or the school further out at the edge of town? Would it be languages, an emphasis on, or would it be a curriculum allowing him to keep on with his art?

(All the care you took to keep every one of his drawings. All the care, to keep them, and file them, and store them in portfolios so that they would always be safe – )


No longer relevant: the word portfolio.

Strange the way the mundane memories are the ones to push through most forcefully. Strange the way you arranged all that family time, all of those days – the days you were expected to arrange and the days that were the business of nobody but yourselves – and then the things that insist on surfacing, now, are these things. R, last year it would have been – some weekend afternoon last winter – answering the phone in the hall. And you moving to take it from her, the way you did, because there was no point, because there would be only confusion, irritation possibly, for the person on the other end: and then suddenly, this child in front of you has turned into a child who can make conversation, who can say who she is, and what she is doing these days, and to keep going, keep talking, with whoever this caller is, and you can tell that it is not one of her grandparents, not one of her uncles or aunts, that it is someone more distant, someone maybe even a near-total stranger, who has dialled your home number this day, for a reason yet to be clarified, yet to be explained. And you stand there in the doorway to the hall, listening to your daughter, watching the set of her as she nods and smiles and with her eyes follows and latches on to what is being said –

And you were proud. And, feeling optimism for the future, that kind of thing, that kind of blind, weightless presumption. That here was a child who could do this, who could so easily hold her own with a person who was not her own –

Which is another thing about which you know that you were foolish then. Although it is not that there is nobody who can be trusted; it is not that simple, not that clean. It is rather that it is, until the last – worst – moment, impossible to tell.

And worst. The notion of there being a worst. And that; yes. That.

O the mind, mind has mountains –

All your precious, hoarded scraps of literature, coming useless to you still. Those, too. Coming treacherous to you, the low-wagging, creeping return of the dog you know to have torn your flock to shreds:


For it was the middle of June –


For an old bitch gone in the teeth –

Any answers: those, too.

All of this seemed impossible, but that is irrelevant too. Impossibility, you know now, is about the past, about what you can keep with you from the past; it is not about the future and what it might turn out to bring. Nothing is impossible, no matter how impossible it seems, no matter how alien, no matter how much it seems to belong to another place, another language, another continent, and not to here. On the Sunday you were listening to the talk of another place on the radio, and the experts were sombre and the commentators were grim, but it was another place they talked about, another place’s problem, and after the radio programme was over, the experts and the commentators got their taxis home from the studio and had their own Sunday lunches with their families, just as you did that day with your family; the five of you sat around the table and talked of football and forecasts and of the sky. The sky: a thing the five of you lifted your faces to look at, out through the rain-streaked glass of the French doors, and the sky was a thing, that day, in that language, that moved – cloud-heavy, greying – only with the surge of its own shadow and wind. It’ll clear, K said, and the children believed him and you believed him, and K – your dazzling, your generous K, magnificent he was, incredible he was, and all the superlatives – K, you know, believed himself. And he was right: it cleared. Blue and easy.

Early the Friday morning; you were all home. Getting ready. Not for the impossible; for the expected. Schoolbags, briefcases, sandwich bags. You can remember seeing one of the sandwich bags afterwards, by what must have been – what had been – the wall of the kitchen, though maybe it was, now that you think of it, by what looked to be – what had been – one of your husband’s hands.

(Strong hands that you liked so much to look at, tanned always on the knuckles and freckled along the lean fingers, dirt under the nails often from the work in the garden, callouses from the fork and the spade – )

(Thinking, as you were, of B, the boy you had loved so fiercely, so desperately, the boy with the lovely, dark eyes –)

(Why is it that these traces refuse to go?)

(B could be here too, for all you know. B could be in this place too. There are so many; the numbers are so huge, in these fields which have become a teeming and unbearable city; B could be living this way too.)

On the Friday it came for you: the impossible, and the sky dark and surging with it.

No longer relevant: your blood type.


Your longings; the whole, indulgent business of the heart, actually, the whole business of what it asks for, and what it prefers.


Your passwords, all those dozens of hectic algorithims, all those paths into ways of talking, and ways of seeing, and of being seen, being considered; your streams and your feeds and your pages and your subscriptions, and all the countless minutes and hours you thought it was all right to waste.


No longer relevant: the way that hunger felt when it was always on the verge of being melted away.


The way pain felt when all it needed was a pill pushed through a blister of foil.


The things the radio told you.


The things the people on the radio must, surely, also have believed.

Next to you is a woman who has gone through much the same thing, whose loss, in terms of proportion, is pretty much the same.

You speak only when absolutely necessary.

You do not want one another’s blunt mirrors.

Never until the mankind making –

(Even the slowest, the most bored, the most obstinate of your students always adored that poem. Year after year, their faces changing when you read it aloud, when they heard its angry, thumping incantations; their eyes, as you watched them, becoming bright with the idea of such a passion, such a refusal: one long, roaring, damning exhale. What a lucky child, you saw them decide, to inspire such fury; to be someone so mourned. Year after year, a classroom of wistful narcissists, thinking if only I – )

W had his father’s colouring. Thin little frame of him, so easy, so gorgeous, to gather in your arms. He sometimes gave a kind of shiver – of happiness, you supposed, of basic human pleasure – when you did that, when you folded him into yourself that way. A kind of jealous glee at being the littlest of them, at having an access to you that the others were too grown to have. The baby voice that he still put on sometimes and for which you chided him, even if it was a sound that you never, ever, wanted to go away; the beautiful delicacy of his bones.

After the first death, there is no ending.


After the first death, there is no –