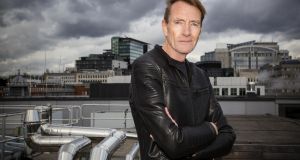 Lee Child: Born James Dover Grant, he was “a slippery, shadowy figure” according to a teacher.

The subjects of literary biographies, by and large, are both widely revered and safely dead. There’s no great mystery in this. Chunky biographies are a seasonal phenomenon, among the dependable unit-shifters that can hold their own in the pre-Christmas big leagues. And the consensus seems to be that – unlike, say, footballers or former commandos – most living writers just aren’t box office material.

There are exceptions, of course, and at first glance it might seem inevitable that Lee Child should make the cut. He’s long been a celebrity writer, a very different breed from celebrities who’ve written books. But as Heather Martin’s title suggests, that’s not what makes him truly interesting. Lee Child created Jack Reacher, a character of such gigantic appeal that even this A-list author remains in his shadow. And to invent Reacher, Lee Child first had to invent himself.

6 Covid-19: Self-isolation rules to be eased for healthcare workers

7 Deaths of three brothers near Mitchelstown investigated by gardaí

10 One-quarter of TDs are property investors or landowners

16 Megan Nolan: At 15, I betrayed my boyfriend under the influence of the little alcohol it took

18 Q&A: What are the new coronavirus variants and should we be worried?

19 Behind Her Eyes: Sarah Pinborough on writing the Eve Hewson hit and its ‘WTF’ ending

24 Jennifer O’Connell: The Government doesn’t trust us and it’s mutual

26 Blackrock cottage beside a babbling brook and parkland for €725k

27 Caffeine hit: The rise and rise of Irish coffee culture

32 Coronavirus search: How is Covid-19 spreading in your area?

33 Barry Gibb: ‘My brothers had to deal with their demons, but my wife wasn’t going to have it’

34 ‘Defund Paw Patrol’: Why protesters have turned against a kids’ cartoon

39 The Irish Times view on John Rawls: triumph in failure

40 Back to school: ‘You hope they will be able to catch up’