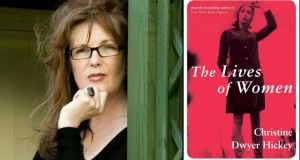 The Lives of Women by Christine Dwyer Hickey is the new Irish Times Book Club choice for July.

Reviewing the novel in The Irish Times earlier this year, Christina Hunt Mahony wrote: “Nearly a century ago, Brinsley McNamara’s The Valley of the Squinting Windows gave us a candid perspective on small-mindedness and the potential for harm behind the twitching lace curtains of rural Irish towns. Christine Dwyer Hickey has taken up McNamara’s mantle, shifting the action from Main Street to the cul-de-sac, to show that in the intervening generations not much has changed. The corrosive power of gossip, the strangulation of bad marriages and the emotional neglect of children who are otherwise well provided for – all these retain their power to blight lives. The Lives of Women deals honestly with these markers of malaise without ever despairing of the resilience of the human heart.”

The poet John Montague nominated Dwyer Hickey in our Irish Women Writers series, declaring: “Novelist, short-story writer and playwright, Christine Dwyer Hickey is as diverse and original a talent as one could hope to find.”

The Lives of Women tells the story of Elaine Nichols, who after a long absence spent in New York, returns to her childhood home to live with her invalid father and his geriatric Alsatian dog. The house backing on to theirs is sold and as she watches the old furniture being removed, she is taken back to a summer in the 1970s when she was almost 16 and this small out-of-town estate was an enclave for women and children while the men are mysterious shadows who leave every day for the outside world.

The women are isolated but keep their loneliness and frustrations hidden behind a veneer of suburban respectability. When an American divorcee and her daughter move into the estate this veneer begins to crack. The women learn how to socialise, how to drink martinis, how to care less about their wifely and maternal duties.

While the women are distracted, Elaine and her friends find their own entry into the adult world. The result is a tragic event that will mark the rest of Elaine’s life and be the cause of her long and guilt-ridden exile.

Insightful and full of suspense, it is an uncompromising portrayal of the suburbs and the cruelties brought about by the demands of respectability.

The Lives of Women by Christine Dwyer Hickey is published by Atlantic Books, priced £12.99

Next: Christine Dwyer Hickey on how she came to write The Lives of Women.