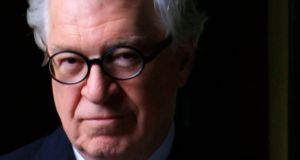 Frank Delaney: described by US broadcaster NPR as “the most eloquent man in the world”. Photograph: Meng Li

President Michael D Higgins led the tributes, saying: “It is with great sadness that I have heard of the passing of Frank Delaney, acclaimed novelist, broadcaster and journalist. RTÉ had the benefit of his considerable talent and skills and he was widely appreciated as the BBC correspondent in Dublin.

“Frank Delaney went on to create a space to discuss arts and literature, winning both critical acclaim and substantial audiences for his broadcasts as well as his writing. He was recognised as an important scholar on the work of James Joyce and an influential Irish voice in the UK and further afield.

“Sabina and I want to express our condolences to his wife Diane, his sons Francis, Bryan and Owen, their extended family, his colleagues and his wide circle of friends.”

From Co Tipperary, Delaney began his media career as an RTÉ newsreader in 1970. He later joined the BBC as a news reporter covering the Troubles before moving to Britain where he made his name as a leading arts journalist.  He created the weekly Bookshelf programme for BBC Radio and presented BBC Television’s weekly arts series Omnibus, his own self-titled talk show, a major TV series on The Celts and a radio series on the English language, Word of Mouth, as well as the screenplay for an ITV adaptation of Goodbye, Mr Chips, which starred Martin Clunes. He also made dozens of arts documentaries about figures such as Joyce, Shaw, Oscar Wilde, Matisse and Van Gogh.

Described by US broadcaster NPR as “the most eloquent man in the world”, Delaney interviewed more than 3,500 writers in a career spanning more than three decades.

He moved to the United States in 2002, where he lived with his wife Diane Meier in Connecticut. In 2004 he published his bestseller, Ireland, a Novel, and on Bloomsday 2010 he launched Re:Joyce, a series of short weekly podcasts which have been downloaded more than 2 million times. They go page by page through James Joyce’s Ulysses, discussing its allusions, historical context and references.

A Rap Tribute to James Joyce by Frank Delaney

Very sad to hear reports of the death of the inimitable @FrankDelaney - his Re:Joyce podcast was and remains 1 of the great #Ulysses guides. pic.twitter.com/ZujzTMgS0G

RIP @FrankDelaney the most charming, lovely man, what a joyful legacy is the ReJoyce podcast: https://t.co/gVbLUwTJQ9

“Frank Delaney had a delightful and infectious love of books,” said author and former Irish Times literary editor John Banville, “and of the novel in particular. He was not a ‘highbrow’, nor did he pretend to be, but certainly he was one of the media voices which from the 1970s onwards helped to lift fiction up again to its high place in the public’s notion of what literature is and should be. Today’s young novelists owe more to him than perhaps they realise.”

New York-based Irish author Colum McCann said: “Frank Delaney was a man of great humour, grace and style. He celebrated, in TS Eliot’s terms, the auditory imagination. He was, in many ways, an international literary lighthouse. He stood on the cliffs and shone out in every direction. We will miss his voice, but we should be glad that we had it at all.”

Fellow author Chris Cleave said: “I met Frank Delaney in 2010, in Steamboat Springs in Colorado. Frank was MCing the literary festival, of which I was the least well-known and most jet-lagged participant, and he the most encouraging and solicitous host. He’d taken the trouble to read everyone’s books, which isn’t always the case at these events, and he presented our work with great love and generosity, as if it was his own. Indeed, he often did segue into heartily recommending his own work during our introductions – something he achieved with such effervescent charm that everyone loved him for it and cheered him on.

“Frank was wonderfully generous with his energy whether the mic was on or off: this was a man who had read everything, written with great success in a dozen different genres, and knew where all the bodies were buried. Talking to him made you realise that yes: books are an extraordinary journey, worth committing a life to.

“Joyce in particular ran through him like Blackpool through a stick of rock, and you couldn’t listen to him without picking up Ulysses again and thinking: ‘Ah! If only I’d known that the first time’. Back then he was just embarking on his epic Re:Joyce podcast, a tremendous (and sadly unfinished) labour of love, which shows the depth of a man who was also capable of writing with lightness and grace. How good it would be if the mantle of that podcast could now be taken up by one or more fellow travellers.

“Aside from his attributes as a serious student of substance and style, what made Frank so memorable for me – and what made him such a great writer – was his ear for the simple, strong story. At the heart of all his anecdotes there was a love for people in all their complexity. I salute the passing of a giant: one who was not above stooping down to earth to encourage a writer who was just starting out.”

Terence Killeen of the James Joyce Centre, Dublin, said: “Infectious enthusiasm was the rare, special quality that Frank Delaney brought to the work of James Joyce. Quite a few people are Joyce enthusiasts: the difficult trick is to communicate this enthusiasm to others who, initially, do not share it. Similarly, quite a few people can analyse  and dissect the work without giving much sense that they particularly care for it.

“Delaney genuinely loved Joyce’s writing, and he was able to communicate that love to a mass audience in an extremely unusual manner. Only one other person that I know of – David Norris – is able to do this. In the early 1990s, Delaney addressed the Dublin James Joyce Summer School on Joyce and Shakespeare. It was a most unusual lecture – resolutely unacademic, revelling in Joyce’s linguistic quirks, revelling in the way that Joyce quarried Shakespeare’s life and work for his own purposes, revelling in the sheer audacity of Joyce’s appropriation of the greatest English writer to create out of his work ‘something rich and strange’, an extra dimension to the already massive Shakespearean presence.

“What was wonderful about Delaney, both on this occasion and on his other public encounters with Joyce – he delivered another lecture around the same time in the late Augustine Martin’s Joyce public lecture series – was his complete lack of embarrassment about, his complete indifference to, his own very slender academic credentials for taking on this writer. He could not be fazed by the professors, by the so-called experts; he loved and enjoyed Joyce’s works in his own way and for his own sake, and cared nothing about the opinions of others about his approach.

“He never pretended to be an ‘intellectual’, whatever that is; he was just his own Clonmel self, well aware of the gift he had received in his mellifluous voice and accent, well aware of the power he had to bring audiences with him down paths they might not otherwise explore. In recent years his Joyce podcast was a hugely helpful gateway to Ulysses for a new generation of readers. His commitment, his sense of fun, his love for Joyce’s work, will be greatly missed.”