Karl Parkinson, the first working-class writer out of the blocks

Growing up in the flats I met no writers. Nor could I find much Irish literature by anyone like me. Where was our Henry Miller, Hubert Selby, James Kelman or Irvine Welsh? 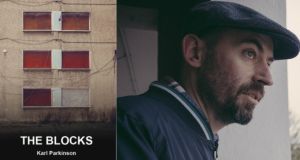 One night, when I was three years old and lived in Ballymun Towers, two men barged into our flat wearing motorbike helmets and overalls. One had a lead pipe partly covered in black plastic that he said was a gun. They were looking for my Da to take his drugs and/or money from him. He wasn’t in at the time, but I told the two men that me Da would kill them when he caught them. They went away and never came back.

Not the average childhood memory of your typical Irish writer, but then I’m not your typical Irish writer and The Blocks is not a typical Irish novel. In fact it’s unique for more than one reason. It is, as far as I can tell, the first Irish novel written about and by someone who has grown up and lived in Dublin’s tower blocks – Ballymun, O’Devaney Gardens etc. It is a work of proletarian literature written in the dialect of the least represented people in Irish literature – the working classes, drug addicts, prostitutes, long-term unemployed, suicidal young men, street people – represented in all their violent, tragicomic, resilient, mad, exuberant existence.

I could roll out lots more memories of tower block life: drugs, murders, gangsters, parties, robbed cars, OD’s...its all in the book. But the book is also my story. The story of an artist from the blocks.

Growing up in the flats I met footballers, guitar-players, drug-dealers, bus-drivers, shop-lifters, milkmen. No poets, no writers. Neither could I find much literature by anyone like me in Irish literature, past or present. Where was our Henry Miller, our Renaldo Arenas, our Hubert Selby, our James Kelman or our Irvine Welsh?

If we didn’t have any equivalent, I thought to myself, then let’s not wait around for it to happen by itself. So here I am.

I didn’t meet any other writers till I was 30 years old and I went to an open mic. In out-of-my-way, hip Camden street. I read some poems that night and the other writers there liked them. I made a breakthrough. I’ve made many breakthroughs since that night. I feel that this book is the biggest one so far.

Three years of work, writing, editing, submitting, acceptance, redrafting and now it’s screaming it’s way into the labour ward of the literary scene. A bold little baba strutting in the hands of whoever will have it for the night. A few boxes have already made it out to the hands of some of my working-class community and they seem to be delighted to be in a buk, so far. It might be a dark dance at times for those from outside the blocks. But it’s been a dark dance at times for us who lived and still live in the blocks. Truth and beauty are the poet’s jobs.

I believe there’s a lot of beauty in this book to go with the dark. The beauty of visionary glee. The beauty of lyricism and music of the city, of the voices of The Blocks, of the language of the people and the poetry of survival and victory.

I’m been told by various people – writers, journalists, care-workers – that this book is a significant event in Irish literary history, by virtue of its very existence, its anomalous birth and its anthropological insights. That’s fine with me. I do hope and feel that it’s a work of art of its own merits too. That’s up to the readers, critics, time, history, all that stuff. That is not the writer’s job.

The writer’s job is to write the bloody book as best as she/he can. So I’m on to the next book, a collection of poems to be published by Salmon Poetry in the autumn. I’m not sure how common publishing a novel and a poetry collection in the same year is; s’pose that’s significant too. Will Irish culture be able for two books from a working-class kid in the same year? Only one way to find out. Well, The Blocks is the first one. I hope it scares the life outta some people. I hope it makes yiz bawl yer eyes out. I hope it makes yiz bust yer guts laughing. I hope it turns yiz on. I hope it hits yiz like a shot of H. I hope it charms yiz all to me bed. I hope it takes yiz out dancing all night and makes yiz a proper cuppa tea in the morning. I hope that it along with Frankie Gaffney’s Dublin Seven inspires more working-class men and women that they too can write works of literature, make works of art, be artists, poets, novelists. I hope it inspires more publishers and makes them see that the lives of those people are as fit for literature as any others and they take a chance just like New Binary Press has with me and my book. Let there be a revolution of street literature for the masses, of poetry by all people, for all people.

The Blocks (New Binary Press, €15) is out now. It is launched by Frankie Gaffney with Dave Lordan as MC tonight, Friday, June 29th, at 7pm, in J.K Stoutmans (formerly The Tram pub), James Street, Dublin 8.