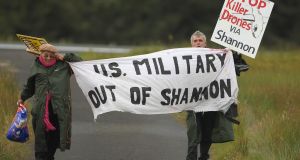 Shannon peace activists Margaretta D’Arcy and Niall Farrell attempt to block the runway of Shannon Airport in protest at the use of the airport by the CIA and US military. Photograph Niall Carson/PA Wire 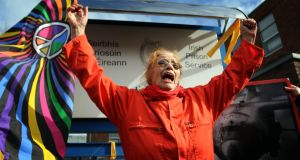 Amid a mass of refugees at Euston Station intent on getting out of England at the outbreak of war in 1939, the five-year-old Margaretta D’Arcy saw a grown man brought low. He was seated on his suitcase, his glasses slipping from his nose, tears running down his face. Someone kicked his suitcase. This shocked her. She had never seen a man cry before. It was, she sensed, what war brought: fear, panic, humiliation.

Later, she joined Bertrand Russell’s Committee of 100, married the playwright John Arden, began giving birth to sons and moved to a house on a village green in East Yorkshire. There she found she was living next to an RAF/US Air Force base housing nuclear missiles. She wrote a letter to the American commander of the base saying she and her family felt personally endangered by his weapons and asking him to examine his conscience, then cycled over with a baby on her back to deliver it. The commander’s reply, through the local police, was a threat (not acted upon) of 25 years in jail for encouraging a soldier to abandon his post. In time the commander went away.

Decades of playwriting, pageantry, pirate radio, books and protest followed. She’d been born in London to a mother who came from a family of Russian Jews and a father who’d been in the IRA during the Black and Tan War. Through some of these decades she was in London, in others in Galway. Protest was constant. She was jailed in the North for campaigning for political status for the women in Armagh prison and again in London for the Greenham protests against Cruise missiles.

Protest is often dismissed as futile, but the Greenham campaign worked. After 19 years, the encamped women’s nerves outlasted those of the government and the missiles were removed. It was this success that persuaded Margaretta, by then a grandmother, to join the protests against the use of Shannon airport for the movement of US troops, military equipment and black ops specialists taking people away to be tortured to advance the wars in Afghanistan and Iraq. This, she believed, made Ireland complicit in war crimes and its people targets for revenge and violated the country’s constitutional position on neutrality, something adhered to in the face of tremendous pressure from Britain during the second World War. What form these protests took, and what ensued, is the subject of this book.

Margaretta conceived of her protest as an effort to engage the Irish State in a conversation. The State, for its part, declined. Bertie Ahern declared to the Dáil that the Government would continue to let the Americans use Irish territory and facilities to prosecute their war because the American government would be annoyed at Ireland if not allowed to do so. Later, Enda Kenny accepted President Obama’s thanks on St Patrick’s Day for Ireland’s invaluable contribution to the American war effort. The rest was silence.

Sometimes, Margaretta sensed, the State needs to be provoked into engaging with important concerns raised by its citizens. She and Niall Farrell (brother of Mairéad, killed by the SAS in Gibraltar) got over Shannon’s perimeter fence and stood in the runway. It was a long while before anything happened. She thought of lying down and taking a nap. Eventually she was arrested. The Garda told her a file would be sent to the Director of Public Prosecutions. When she heard nothing further she wrote to the Minister for Justice pointing out that her crime was serious and she should be charged, but if she wasn’t she would take it he and the State approved of any future efforts by her to help stop the takeover of an Irish civilian airport by the US military.

Gardaí had smashed up protests about Shell’s offshore gas projects in Rossport, but about Shannon they and both the US and Irish governments were desperate to attract as little attention as possible to the military use of the airport. The Americans wanted continued uninterrupted access and the Irish Government were embarrassed by the efforts to prevent it by this 79-year-old woman who needed a stick to walk. They tried everything they could to offer her a way out. But her position was simple. She wanted the Garda to investigate international crimes at Shannon, and if they declined because they had no evidence she believed it was incumbent on her as a responsible citizen to go back over the fence and collect the evidence herself. The argument was ineluctable. She was implacable. The State was ensnared. Judge Patrick Durcan convicted her in Ennis and she was sent to Limerick Prison.

Jail time is an interlude in this book and, for me, a revelation – the poems, the bird whistling, the intrigues, the sympathies and cruelties of the warders, the failures and at times well-intentionedness of the regime and above all the astonishing cast. Irish women’s prisons, it is here revealed, are full of people from all over the world. There are the mother-daughter chip-shop owners running drugs, foreign nationals shopped by aggrieved boyfriends for visa violations, a Vietnamese with one of the largest indoor marijuana operations in the country, Polish pickpockets and a Hungarian on the run from her Irish bisexual butcher boyfriend and her own country’s mafia. The latter helps Margaretta with sacks full of post from old friends, Irish schoolchildren and supporters from all over the world. John Berger sends a drawing of a magnolia from the Alps.

I first met Margaretta and John Arden about 40 years ago. John died in the midst of the Shannon protests. He had cancer, was wheelchair-bound, arrived at a crisis and went to hospital, where he was left on a trolley without food or drink, suffered dehydration and blood poisoning and finally left the world buoyed on a morphine cloud. You can feel lucky in your life if you meet one such man as him. He had a sonorous voice, a magnificent mane of hair, wit, learning, vigour, a noble bearing and a purity of dedication to his art. In his use of ballad and verse and in his ability to give his characters and predicaments the weight of the mythical he was like an Elizabethan, with in addition the conscience of a Leveller.

Margaretta’s record of her goodbye to him in this book is tender and true. I stayed with them sometimes, once in Corrandulla on the road to Tuam in the house most resistant to bourgeois comforts of any I’ve seen. It was full of life-sized cut-outs in grotesque cartoon style from one of their street protest pageants. I thought of those figures when reading Margaretta’s description of herself and her sisters putting on gas masks in wartime London and feeling the magic of being transformed into new creatures, half-human and half-pig.

There is an innocence to this book, the feigned theatrical innocence of the mask or the comic with a straight face, the one she displays to the Garda and the court. But there is also an authentic innocence in the freshness of her descriptions of her fellow prisoners, of her reaction to the crying man at Euston station or her discovery that she was living next to nuclear weapons on a green in Yorkshire and to the question she wishes to pose to the Irish state about the use of Shannon. It is innocence in pursuit of sanity. “The most elementary rebellion,” wrote Camus, “expresses an aspiration to order.”

Her campaign was a piece of public theatre in which, among the dramatis personae, were a number of prominent Irish political personages. Michael D Higgins orated passionately about Shannon being traduced when in opposition, but maintained a perhaps uncomfortable silence from Áras an Uachtaráin when Margaretta was in prison. His wife, though, visited her there, as did Gerry Adams, who also raised questions in the Dáil about her detention. She had provoked Alan Shatter with a letter asking that she be arrested and was subsequently tried and sentenced by Judge Patrick Durcan, a one-time Fine Gael politician who lost his seat and then became a judge.

Much was made during the recent election of Adams’ association with the IRA. by all the parties which had been in government during the past half-century. Moral traction was sought. There were many looking on who wondered at the irony of Irish governments condemning republican violence while countenancing that practised by the British state and who were now facilitating America’s catastrophic Middle East wars, with their torture centres and hundreds of thousands of dead.

These are issues which transcend the theatre of protest and become matters of life and death. Margaretta with her walking stick and her orange Guantanamo boiler suit and her tongue sometimes in her cheek has often been dismissed as a prankster or attention-seeker or a crank, but her and her colleagues at Shannonwatch’s attempts to engage the State in conversation go to the heart of what that State is, and might be.