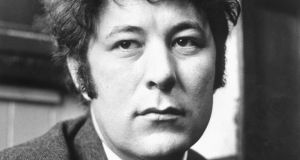 There was “collective shock” among the literary community today at the sudden passing of “one of the world’s greatest writers”.

Poet Theo Dorgan has said late poet Seamus Heaney would react in “half embarrassment” at being compared to the great Irish writers such as W.B Yeats, James Joyce and Oscar Wilde, but “he deserved it. He is there”. He was also a very loved poet and people “just beamed” in his presence.

He had, more than any other poet he met, “genuine humility. He knew his gift was just that, a gift”. He was a supportive writer who offered “solidarity and companionship” to others aspiring to be poets, he said.

Fellow poet Thomas Kinsella said he knew from Seamus Heaney’s early poems that the writer was the “real thing”. Kinsella described himself as “still in a state of shock” following the news of his death.

Novelist Colum McCannsaid Heaney had brought “incredible joy” to readers. He was a “truly decent man who operated so well in the world”. He had his sudden death had led to a sense of “collective shock” among the followers of his poetry, he said.

Poet and friend Michael Longley said he was “personally bereaved at this very sad news” and felt that he had lost a brother. He had read with Heaney two weeks ago in Lisdoonvarna and it was a “very happy occasion”.

He told Heaney that the poems he had written as a young man were “miracles” and he continued to write “miraculous poems throughout his life”. He said Heaney was an extraordinarily popular poet given the complexity of much of his writings.

Poet John McAuliffe said that Heaney’s poems and “advocacy of the art of poetry” had “defined the horizon” of his gneration of poets.

“His attention to language, the carefulness with which he prepared even short speeches or statements at festivals and launches, meant his presence at public occasions was a signal example,” he said. .

“For younger writers he was not only a great encourager, but a canny adviser who would often manage a quiet word in the snug of an after-hours festival club or at the back table of a downtown café, an intellectually brilliant man who still read new poetry with a curiosity which drew on his own depth of feeling and learning,” he said.

In a statement, Heaney’s publisher Faber and Faber said it could not adequately address the profound sorrow at “the loss of one of the world’s greatest writers”. It said his “ impact on literary culture is immeasurable.”

Abbey Theatre director Fiach Mac Conghail said it was with “deep sadness” that theatre members had learned of his passing. “He was an advocate for art and conscience; a true and inspiring cultural chieftain,” he said. “Seamus was a generous spirit and will be sorely missed by us all,” he said.Mr MacCongail said the poet had a long association with the Abbey Theatre , first reading poetry there in 1972. An extract from his poem From the Republic of Conscience will be read after this evening’s performance of Major Barbara at the theatre.

Arts Council chair Pat Moylan said Heaney was “undoubtedly a poet of outstanding achievement and his contribution to literary and cultural life in Ireland has been, and will continue to be, immeasurable.

“His work, always intelligent, humane and beautiful, earned him devoted readers across the globe. Unstintingly generous, Heaney offered invaluable guidance and support to countless artists and writers, and remained a fervent advocate for the role of poetry and the arts in our society throughout his life.

“His presence - on the printed page, at the countless readings and events he attended - will be deeply missed.”

Ms Moylan said the Arts Council’s celebration of its bursary award winners on 12th September, which will be addressed by the Taoiseach and which Heaney had been expected to attend, would now be dedicated to his memory.

The National Library of Ireland said his contribution to artistic and cultural life of the nation was “extraordinary.” It thanked him for donating his literary papers to the library in 2011.

Poetry Ireland “deeply” regretted the passing of a “towering presence in the world of poetry”. “. His presence will be profoundly missed but the vitality of his spirit will live on through his brilliant work. He leaves us an extraordinary legacy,” the statement said.

The Irish Writers’ Centre said Heaney was a “great friend” to the organisation. “ We remember him for his gentle nature, generosity of spirit and wonderful contribution to Irish literature. He leaves a remarkable legacy,” the statement said.

Actor Adrian Dunbar led a round of applause at the bust of Heaney in the Lyric Theatre in Belfast, while a book of condolences is to be opened in the Guildhall in Derry.

The Books Quiz: Who wrote The Naked Lunch?
3