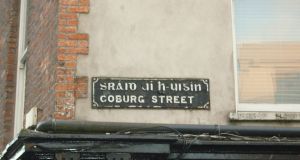 Coburg Street in Cork city, which has an entirely unrelated name, Sráid Uí h-Uigín (O’Higgins’ Street), in the Irish language

I have always found the street name “Barrack Street” interesting because it is determinedly, unapologetically, literal. There is a barracks here, so that’s what we will call the street. It is similar to Main Street, an Irish street name whose ubiquity requires no explanation. Not all street names are so down-to-earth; many commemorate the famous (dead or alive) who may never have visited the town in question. Some street names invoke status, such as “Grand” or “Mall” with their echoes of gentility. Each street name has a long and often complicated history, with the maps diverging from common usage or street signs showing two different names for the same street. The image above shows Coburg Street in Cork city, which has an entirely unrelated name, Sráid Uí h-Uigín (O’Higgins’ Street), in the Irish language.

Street and place names are a fascinating reflection of politics, snobbery, geography, fashion, vernacular culture and pure chance. Brian Friel took a provocative look at the significance of place names in multilingual societies in his play, Translations. But the play is not too precious about local heritage, pointing out that a place called Tobair Vree was so named because, 150 years before, a local man drowned in a well, an event that almost nobody in the parish remembered, or cared to remember.

It is a caution against ascribing too much weight to place names, but politicians have always taken street names very seriously. In 1944, while Europe was engulfed in the second Word War, Cork city politicians mulled over the important issue of street names. The Street Names Sub-Committee drew up a list (and not a little list) of street names that had to go, along with their suggestion for replacements. This is the full list:

The unacceptable street names were a mix of the posh and the politically incorrect. The memory of James Connolly, Ireland’s most famous revolutionary socialist, would cleanse the streetscape of the genteel Grand Parade. The Duke of Wellington, a British military hero, would be replaced by Michael Collins, a revolutionary founding father of the Irish state who looked good in uniform. The sub-committee list was not a comprehensive listing of all the British or imperial street names in Cork city: Caroline Street, Coburg Street and Hanover Quay were absent. Perhaps there weren’t enough dead Irish revolutionaries whose names were acceptable to politicians from both side of the civil war divide. In any case, the list was entirely redundant since Cork Corporation could not unilaterally change street names. Two-thirds of the ratepayers on the street had to agree and the sub-committee concluded that such approval was unlikely to be forthcoming.

The city’s Barrack Street did not make the list, even though it marks the site of a barracks that was opened in 1689. However, the barracks was gone by the late nineteenth century, replaced by the memorably named Prosperity Square. Perhaps the physical removal of the barracks was enough to make the street name politically unremarkable. Other Barrack Streets were not so innocuous. By 1890, Dublin Corporation had renamed the Barrack Street that ran alongside the Royal Barracks Benburb Street to commemorate the Battle of Benburb.

These changes occurred in the twentieth century, after the British army barracks had been inhabited by the Irish army. Perhaps it was the unsavoury social associations of the barracks rather than political objections to a British past that motivated ratepayers and politicians in Fermoy. It may be significant that most of the streets were given saints’ names, with Sheares Street being the only nationalist street name chosen. (After the Cork-born Sheares brothers, who were involved in the United Irishmen.) The more pious inhabitants of Fermoy must have been relieved when “barracks”, a byword for drunkenness and prostitution, was replaced with native Irish saints’ names.

Of course, not all Barracks Streets vanished. Some notable garrison towns did not purge their military place names: Kilkenny city retains its Barrack Street, as does Athlone, Dundalk, Cahir, Clonmel, Wexford, Waterford city and Tipperary town. The local political culture of an urban area probably played an important role in deciding to change place names in post-independent Ireland. According to the Placenames Database of Ireland, there are 17Barrack Streets in Ireland today, though this is probably an underestimate.

Renaming and rebranding place names is not unique to Ireland or solely a result of the divisive nature of modern Irish nationalism. Across Europe (and the world) street and place names are changed to reflect the aspirations and achievements of political systems. For example, in the small German city of Pirna, today’s Breite Strasse (Wide Street) was once Karl-Marx-Strasse and before that, Adolf-Hitler-Strasse. But not all the street names reflecting Pirna’s communist past have been changed: Rosa Luxembourg, the revolutionary Marxist, and Maxim Gorki, a Russian socialist author, are still remembered in the streetscape. Such simultaneous remembering and forgetting are enacted in place names across the world, as societies and governments struggle to define the relationship between the past and the present. Ireland’s Barrack Streets, extant and extinguished, are a small part of that story.

Dr Aoife Bhreatnach is researching the cultural history of Irish garrison towns. Her blog is irishgarrisontowns.com and she tweets about this and everything else @GarrisonTowns