Euro 2016: the intellectual’s guide to football 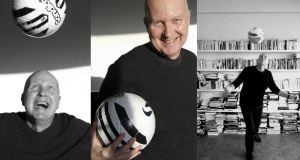 Jean-Philippe Toussaint: ‘I am pretending to write about football, but I am writing, as always, about the passing of time.’ Photographs: Anna Toussaint

In Richard Ford’s novel The Sportswriter, the protagonist of the title Frank Bascombe explains to an intern the key to plying this trade: “learn how not to be cynical”. It’s why “serious” authors tend not to write about sports.

If you look upon these gladiatorial customs with a jaundiced eye then you come across as supercilious. If you address them sincerely you can seem buffoonish. I mean, you’d never catch the likes of John Banville singing “shoes off for the boys in green”.

Belgian author Jean-Philippe Toussaint acknowledges this professional bind on the opening page of Football, a short (85-page) meditation on “the people’s game”: “This is a book that no one will like, not intellectuals, who aren’t interested in football, or football-lovers, who will find it too intellectual.”

Speaking to The Irish Times, Toussaint – who has been closely following Euro 2016 – says: “Of course there are intellectual football-lovers, but in most of the cities I know the people who go to stadia and the people who go to bookshops are different . . . There’s something like an invisible wall, stout and unbreachable between stadia and bookshops.”

Toussaint is a celebrated photographer as well as an author, whose books have been translated into 20 languages. This work, he says, was “a secret way of approaching, for the first time in my books, and in quite a direct way, autobiography”.

“Why go via football? Because of the dominant place that football has adopted in our societies, because football is the emblematic sport of our age. As a writer, I’ve always seen it as part of my mission to speak about the world that surrounds us, to observe it, to decipher it – even if there is always a great temptation to withdraw from the world to write in the splendid isolation of an ivory tower.”

While it may be autobiographical, Football is a long way from Nick Hornby and much closer to Umberto Eco (an intellectual who did write about sports but not in a kindly fashion).

Toussaint has no romantic tales of passing through rusty turnstiles in his youth. His support of Belgium is at a knowing distance (which is just as well given the Wales result). He is the modern, cosmopolitan football fan who might adopt Iceland for an afternoon, or arrange a trip to an overseas international and then feel guilty or self-indulgent for doing so.

“I’m not a very good fan, and I have no ambition in that regard,” he says. “I just try to be a good writer – a precise writer, a contemporary writer. What I set out to do, via the intermediary of football, was to approach more essential questions bound up with the seasons, with melancholy, with time and with childhood.”

His meditation on the game spans the period 1998 to 2014 – five World Cup years, including Germany 2006, a tournament which ended with a famous sending off and inspired Toussaint’s essay Zidane’s Melancholy which is reproduced here as an appendix.

Toussaint avoids social history or anthropology: “I’m not interested in football as a symbol of globalisations or a metaphor for society.” The closest he comes to a unifying theory of the sport is when he says: “Football allows you to be, not nationalist, which would have a detestable political connotation that leaves me entirely cold, and not even patriotic, but chauvinistic, by which I mean a non-duped, second-level nationalism, an ironic nationalism . . .”

His primary focus is on how football is experienced by spectators, and here he captures the inherently absurd nature of following a team. There’s the “catharsis” of being caught up in a spectacle: “Nothing can happen to us while we are watching a football match.” Then, there are the mad-cap encounters on match day. In one touching episode he finds himself at a Sweden vs Paraguay World Cup fixture and a neighbouring supporter “let’s call him Sven, if you like” seeks out anyone within range to hug after his team scores a goal, saving a final, lingering embrace for the author (“even though I was supporting Paraguay”, he states dryly).

Some of the finest passages are on what Toussaint calls “football time”. When you are watching a match you have “a very particular relationship with time”. It’s not just that the clock seems to go either too fast or too slow, nor that moments of suspense can be torturous and pleasurable at once. More than all that, football “brings us a kind of metaphysical wellbeing that diverts us from our miseries and takes us away from the thought of death”, he says. Who could disagree with this the moment after Robbie Brady scored against Italy?

The book also illustrates how football, as a global culture, sucks you into its orbit whether you like it or not. Another amusing episode sees our hero signing up for a live streaming service for the 2014 World Cup. At a time when he was meant to be working on a new work of literature, he was instead on his laptop watching Netherlands vs Argentina, which occasionally would freeze on screen due to an imperfect broadband connection. The word “buffering” would appear and, then, “after a brief gargle, an electronic baby-burp” the game would resume and the ball would have hopped to a new location or even into the net of a goal.

This analysis reaches its apotheosis with Zinedine Zidane’s headbutting of Marco Materazzi 10 years ago this week. The act itself – coming towards the end of an exhausting game, on the last big stage of the Frenchman’s career – is interpreted as a self-destructive shrug, the kind of thing everyone does as “the hours seemed weighted, slower, interminable”.

But, looking back, Toussaint questions whether it happened at all. Deploying Zeno’s paradox, he writes that even if Zidane had sought to head butt the Italian “Zidane’s head should never have hit his adversary because, each time Zidane’s head had travelled half of the distance separating him from his adversary’s torso, it would still have had another half to travel, then another half, then another half again, and so on for ever…”

Unlike theatre, sport has no rehearsed outcome and there’s no script against which the performance can be checked. Once the moment has passed it can never be created again, and so one might wonder whether it happened at all.

Toussaint says: “I am pretending to write about football, but I am writing, as always, about the passing of time.”

Football by Jean-Philippe Toussaint is published by Fitzcarraldo Editions